After speaking up and walking away from Bon Appétit, Ryan Walker-Hartshorn re-evaluates her expectations of food media More in this series
More in this series
08
08
Covid-19 stranded a North Carolina chef in Mexico. The unexpected detour changed his plans forever.
09
09
A cattle rancher built a business selling grass-fed beef in-person. When Covid hit, she had to figure out how to sell online.
10
10
Who gets to call themselves a food writer? The pandemic made it clear: We all do.
See full series

“My project right now is myself”: She’s decolonizing her life, centering her mental health, and uplifting Black stories.

08
08
Covid-19 stranded a North Carolina chef in Mexico. The unexpected detour changed his plans forever.
09
09
A cattle rancher built a business selling grass-fed beef in-person. When Covid hit, she had to figure out how to sell online.
10
10
Who gets to call themselves a food writer? The pandemic made it clear: We all do.
See full series

In the summer of 2020, Ryan Walker-Hartshorn, the only Black woman on staff at Bon Appétit (BA) and assistant to the former editor-in-chief, Adam Rapoport, spoke out about her experiences. Amid a racial reckoning across the food media industry, the magazine’s toxic work environment and pay discrimination for employees of color were publicly revealed. By August, she and several other people of color left the publication. Since leaving BA, Walker-Hartshorn, now 26 years old, has been serving as a consultant on a developing comedy series from HBO Max, inspired by harsh experiences faced by her and others in food media. Although she has also begun to take on freelance projects, most of her energy has been dedicated to healing herself, re-evaluating her expectations of the creative environments she decides to enter, and decolonizing her own life.

This interview has been edited for length and clarity.

I grew up in San Francisco, and then moved to Oakland and spent a lot of my childhood and teen years in Oakland. I played soccer in high school and was fortunate enough to have the opportunity to get recruited by my dream school, Stanford. I had plans to play professionally, but then I had a really crappy injury. In some cases, it could have been career-ending. So I decided to quit soccer cold turkey after graduating. I used my graduation money, bought a one-way ticket, and moved to New York.

I wanted to work because I didn’t know what work was. Many of my college summers were spent training, while my peers were doing internships, jobs, and testing out what they wanted to do. It was hard to do that as a student-athlete. I wanted to work in a restaurant. I moved here in July 2017, then started working as a host at Red Rooster in August. That was my first job in New York, in Harlem.

I was at the point where I just needed a fresh slate and a new start. Restaurants are very team-oriented. I played on a lot of teams throughout my life, so I like that kind of leadership, team-building, get-shit-done thing. After nearly four years of playing soccer for Stanford, a serious injury led Ryan to quit cold turkey and book a one way ticket to New York City.

I started working as the assistant to the editor-in-chief at Bon Appétit on September 11th, 2017. But I kept my job at Red Rooster because I wasn’t getting paid enough and needed to pay rent. I used to go to night shifts after work [at Bon Appétit], but it was way too much.

I do not have a background in food. I played soccer at Stanford. I majored in human biology and African-American studies and wrote a thesis on the natural hair movement. My resume does not scream food media.

[At BA], I expected to have an opportunity to grow the same way the two people before me did in my position. I didn’t. My ideas were called “passions.” There was not a spot or a voice for me there, or for any other Black voices. I would pitch something or write something, but there were these gatekeepers, who are in charge, determining what fits and what doesn’t. That became more frustrating as my time continued.

Black women, all we do is tell the truth. We get scolded for it, punished for it, murdered for it, you name it. And we do it with strength and courage, integrity, determination, [and] love. That’s our legacy.

If you look at the first piece I ever wrote at Bon Appétit, the Oakland article, in my first edit I wrote “gentrification” clear as day. The editor said, “No, we can’t include this.” So I set up a meeting and said, “I’m letting you know that I won’t be writing this piece if there’s no acknowledgment of gentrification.”’ I grew up in Oakland. Then they said, “You can’t use the word, but you can describe it.”

Fast forward to 2020, things are moving along. In my D.C. story, the word gentrification is in it because now they’re pressured externally [to appear and actually be more diverse] and there’s a need for Black content. Still, nobody actually wants to listen to me. Ryan with photographer Kelly Marshall on set for her Washington, D.C., story in 2020.

As the writer Audre Lorde says, “Your silence will not protect you.” It will probably kill you. And I really took that to heart, last May. Black women, all we do is tell the truth. We get scolded for it, punished for it, murdered for it, you name it. And we do it with strength and courage, integrity, determination, [and] love. That’s our legacy. I try to embody that, even though it can be so scary. I believe it really does set you free.

I started interviewing for other jobs because I was being pushed out.

After I eventually quit Bon Appétit [full story here], I was nervous pitching to other publications. I had to remind myself that my ideas and my stories are good. I have a voice, but not everyone is going to like me. I’m not for everybody. The good news is I have a lot of colleagues and friends in the industry who have helped guide me through all of this, especially being a new freelancer and given the circumstances. I feel really fortunate to have that kind of access. And I want to be able to share that with more people.

A lot of people don’t know this, but when I was hired in September 2017, [by] October they had laid off damn near every single person of color.

I remember all these people going into the office, leaving and doing the exit interview. It was just so cold. I was also looking around at all these white people, like, does anybody else feel like this is weird, that you just laid off all the people of color? What the fuck are you doing? But nobody said anything, right?

It doesn’t matter how much you like the platform, at the end of the day, these things are capitalist engines producing content and selling their souls to bullshit advertisers.

I heard lots of those stories. People should speak up and feel supported. Tell your truth and hold people accountable. Storytelling is only as meaningful as the authentic relationships you’re able to build. If you go into a community with entitlement, then your story is going to be wack. There’s lots of those stories. They exist everywhere.

Some publications I have spoken with have a really different approach. A lot of them are run by people who have worked in corporate media. One magazine I really like is Whetstone, a super-cool publication. But I want to see more.

A corporation like Condé Nast, it’s not creative. It’s white supremacist. It doesn’t matter how much you like the platform, at the end of the day, these things are capitalist engines producing content and selling their souls to bullshit advertisers. It’s a constricting grip that these corporations have. And it squeezes all the creativity out of everybody.

The fact that people can’t make the connection between the fights that are happening on the street and inside corporate America … they’re intrinsically linked. There’s overt racism and then there’s covert racism. They’re not mutually exclusive. They impact each other. At a Black Lives Matter protest during the summer of 2020 in front of Barclays Center in downtown Brooklyn.

Lots of things have been confirmed for me in 2020 and early 2021, about what people really think about Black people and Black women. Knowing what I know and what I’ve been through, I have different expectations for what my next creative environment would be. I’m only interested in writing about Black and brown folks and people that happen to be white. I want to work on decolonizing my life. That is my creative process. I like a creative environment that is supportive and caring. One where I feel listened to. Not gaslighted routinely, or punished for speaking up. Not labeled angry Black girl. I felt mighty powerful last summer; I feel like other people can feel that too. If you ever need support, DM me.

There’s some story pitches that I have that I need to get together, but a lot of my project right now is myself. I had a lot of mental health struggles. I was just going and going. I’m that type of person. It hasn’t even really been a year yet. It’s been a really crazy time for everybody, but I’ve been trying to give myself the time to heal.

Disclosure: Ryan and I first met in the summer of 2019, two Black women working in food media. Equal parts solidarity and friendship, our relationship has continued to this day.

Ryan Walker-Hartshorn is an activist, journalist and writer. She's worked as a print and digital content creator for Bon Appétit. She has freelanced for publications like Food 52, Food & Wine and The Infatuation. Outside of journalism, she is Gotham FC's number one fan and developing her skills as a tv writer.

Talia Moore is a senior producer at The Counter. Her previous work has highlighted the intersections of food sovereignty, art, and culture, while centering the marginalized voices of QTPOC, women, people of color, and immigrant communities. Who gets to call themselves a food writer? The pandemic made it clear: We all do. 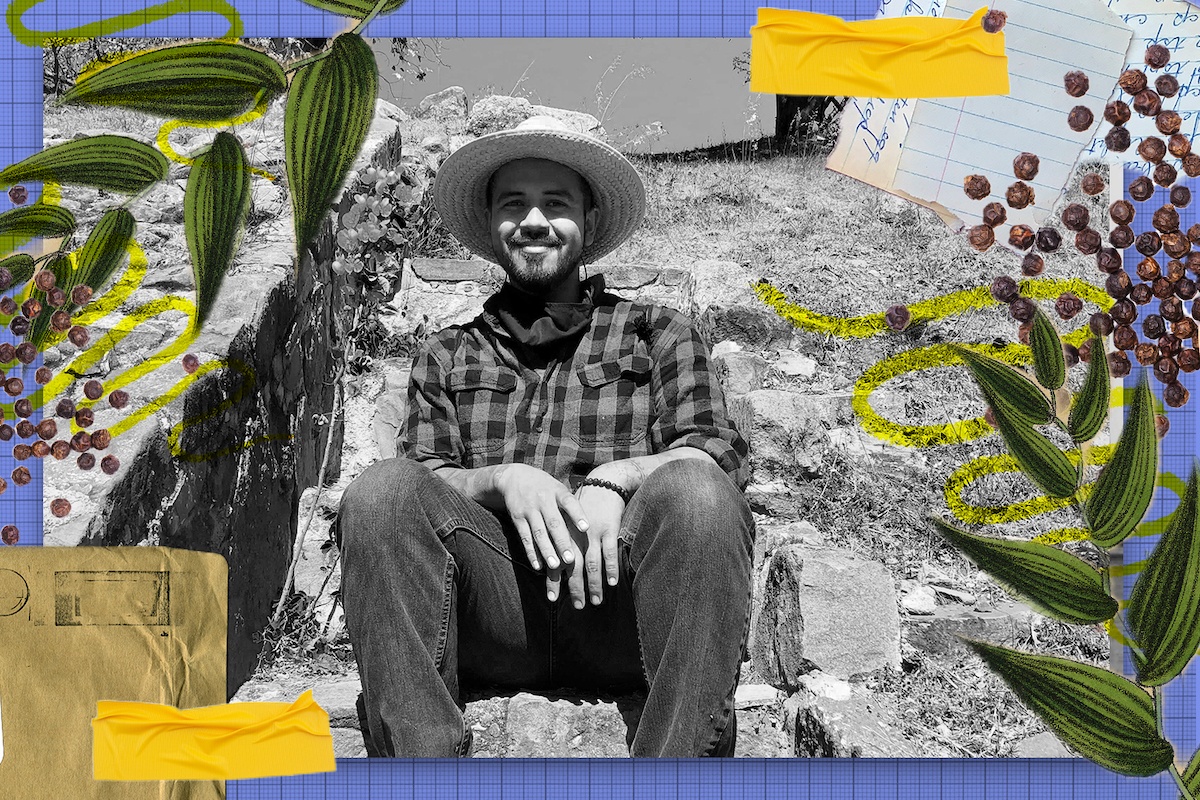