I’m a captain in the Ohio National Guard. I’ve helped distribute 5.4 million pounds of food in the last 7 weeks. “It’s incredibly moving when we put food in a trunk and the people inside the car hold a piece of paper to the window that says, ‘Thank you.’”

In mid-March, as his stay-at-home order was enacted, Ohio Governor Mike DeWine deployed hundreds of Ohio Army National Guard and Ohio Military Reserve soldiers to assist the state’s network of 12 food banks. As a collective, the soldiers sort and package food for transport and distribution to hungry citizens in each of Ohio’s 88 counties.

Tony Keffer, center, pictured above with two of his soldiers at the Greater Cleveland Food Bank distribution drive-thru.

Tony Keffer is one of them. A captain in the Ohio Army National Guard, the Army veteran oversees 70 soldiers deployed to the Greater Cleveland Food Bank to distribute food and other essential items. According to Keffer, his battalion was scheduled to leave the Greater Cleveland Food Bank in late April. But Covid-19 continues to leave record unemployment and food insecurity in its wake—and as need has persisted, so too has their work.

The Greater Cleveland Food Bank serves six northeast Ohio counties where, even prior to COVID-19, one in six residents were identified as food-insecure. (This number has only risen in recent weeks.) Since mid-March, the organization has provided more than 7,000 boxes of food each week—distributing them through the organization’s drive-thru pick-up point, dropping them on the doorsteps of homebound citizens, and handing them out through more than 800 partner organizations that still operate in the community. The agency has also supported school feeding programs with more than 9,000 weekly backpacks of food for grab-and-go meal sites.

In normal times, American food banks are highly dependent on citizen volunteers, many of whom are retirees and thus vulnerable to the coronavirus. Now, as Covid-19 has forced Americans to stay home,  volunteer manpower at food banks has dwindled at the exact time that hunger has skyrocketed. In a conversation by phone, Keffer explained how his soldiers work with food bank staff to meet the current, extraordinary surge in need. The National Guard and Food Bank staff both agreed that the food bank’s location did not suffice for the large drive-thru distribution effort needed at this time. The City of Cleveland granted permission for them to use the city’s municipal parking lot.

Tony Keffer: I’ve been in the military for over 20 years and I’ve never experienced a mission quite like this. What we’re doing at food banks across Ohio during the Covid-19 crisis is unprecedented.

Most of us joined the Guard to help our own communities when called upon. Unfortunately, that hasn’t always transpired as our units tend to be deployed outside of the state for event-driven emergencies. Most of my soldiers are from the Cleveland area and, with this mission, some of them are delivering meals within their own neighborhoods. We’re grateful that we’re able to make an impact at home right now.

I am amazed by the amount of food coming in and out every day. We deliver to over 350 homes a week; we man weekly drive-thru distributions that see upwards of 2,000 cars; we’re taking food to more than 800 pantries, schools, and other facilities. We’re also assisting in the bookkeeping by crunching numbers on what’s coming in and going out. The Ohio Army National Guard delivers to over 350, nearly 2,000 drive-thru distributions, and to more than 800 pantries, schools, and other facilities each week.

As a logistical unit, we’re learning through this assignment. In the military, we don’t generally provide individual support like we are doing now. We’ve learned how to route through neighborhoods and how to prepare efficient individual delivery points. When this is over, the National Guard will have a lot of material to reflect on should this type of support be needed again.

Fortunately, we’ve been able to bring our wealth of logistical knowledge to the assignment. A great thing about the National Guard is that our members have full-time careers outside of their service. So, we have data processors, soldiers working in logistics, or those with a commercial driver’s license—there are a host of skills that our crew brings to the table. In my civilian life, I am a supervisor in the United States Marshals Service where I assign deputies to transport prisoners or serve arrest warrants. I delegate a task and make sure it gets done, which is what I’m doing here.

The Greater Cleveland Food Bank has been very receptive to working with us. Our first week we did a drive-thru distribution and the need was so high that we couldn’t contain it. There was a line for miles and interstate access points were blocked. Members of the National Guard have full-time careers outside of their service, bringing a range of skills to the food distribution assignment from data processors to logistics and commercial driving.

We had a meeting afterwards—the National Guard and food bank staff—and we agreed that the food bank’s location isn’t conducive to the large drive-thru distribution effort needed right now. The city of Cleveland allowed us to use their municipal parking lot—which I had only been to prior for tailgating at Browns’ games. We’re now in a large open area and can provide the help the community needs.

It’s amazing to see a drive-thru distribution come together—it’s the work of multiple agencies and organizations. The Cleveland Police Department is there on horse and motorcycle with patrol cars controlling traffic. Volunteers and staff from the food bank as well as members of the Ohio State Highway Patrol register people in their cars. My team loads up trunks with food.

Working together, we’ve turned this monumental problem of, “How do we get food to the enormous amount of people who need it?” to “Here’s how it’s done.” It’s amazing what can be accomplished together. It’s incredibly moving when we put food in a trunk and the people inside the car hold a piece of paper to the window that says, “Thank you.” The majority of the soldiers are from the Cleveland area and some of them are delivering meals to their own neighborhoods.

When we first started delivering meals to residences, some people were scared as we are in uniform knocking on doors. Initially, there were rumors that we were deployed to establish martial law. Residents were calling the police when they saw us in their neighborhoods. We’ve been doing this for two months, and it’s evolved to where we bring a box to a door and sometimes another door opens to the left or right with a neighbor asking how they can get food for themselves or their family.

Editor’s note: On May 4, 1970, four students were killed and nine wounded at Kent State University in Cleveland when members of the Ohio Army National Guard fired 67 rounds at a campus protest.

We’re near the anniversary of the Kent State shooting, which is a big point of reflection for people in this area. Thinking about what happened 50 years ago and comparing it to what we’re doing today, I think it eases the public’s mind when they see us bringing boxes of food to people in need.

Tony Keffer is a captain in the Ohio Army National Guard. The Army veteran oversees 70 soldiers deployed to the Greater Cleveland Food Bank to distribute food and other essential items.

Nicole Rasul is an Ohio-based freelance writer who covers food and agriculture. Her work has appeared in Civil Eats, Modern Farmer, Forbes.com, Edible Columbus, Edible Indy and others. Read more at nicolerasul.com. 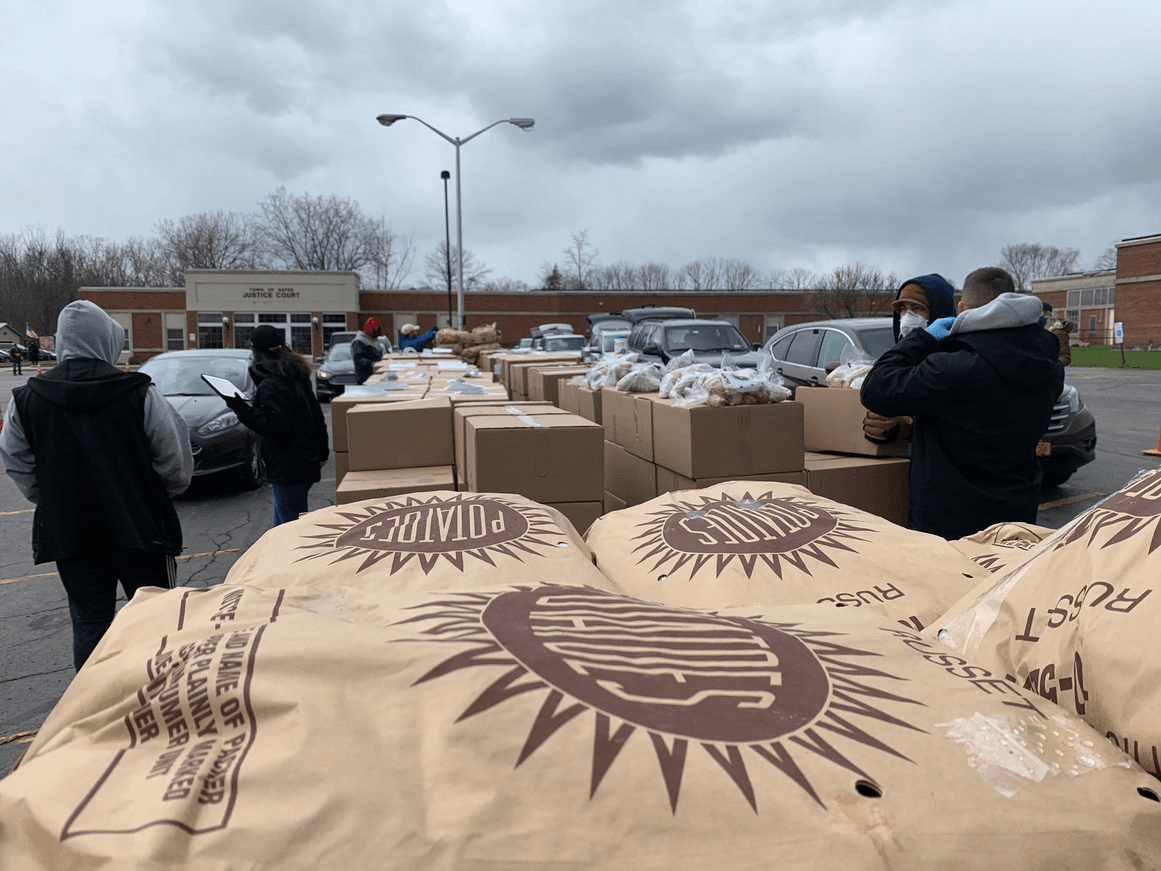 The last government shutdown sent some federal employees to food banks. But 46 million Americans face hunger year-round—shutdown or no