The incoming Trump administration has interest groups across the country riddled with fear and uncertainty, perhaps none more than those that are part of the food movement. Are millions of farmworkers about to be deported? What will happen with the next farm bill? Will SNAP (food stamps) be gutted? What about the various programs run by USDA that promote sustainable and organic agriculture? The incoming president has stated that he wants to deregulate industry, and that he doesn’t believe global warming is real. What does that mean for groups that are trying to reduce the harmful environmental effects of the industrial food system?

“All politics are local.”

In interviews over the past several weeks, and during an event last week in San Francisco, leaders of the food movement seemed both frightened and determined. Most of them are based in California, the nation’s largest agricultural state and the world’s fifth or sixth (depending on how it’s measured) largest economy. They represent all the interests outlined above, and more besides. But they all agree on one thing: while the soon-to-be Trump administration and the Republican Congress must be monitored closely and opposed vigorously when appropriate, the best thing activists can do now is return their focus to state and local politics to the degree possible, whether that means passing soda taxes to help communities struggling with health issues, protecting farmworkers, or getting minimum-wage laws passed. And California, they think, can be a model for the rest of the country, as it often has been.

“All politics are local, and it’s important for all of us to be invested in our local communities,” Navina Khanna, director of the HEAL Food Alliance, told me. “So I’m excited about the prospect of folks building power on a local level, thinking about the infrastructure needed for local food systems and wealth building, as well as local governance.” Among California advocates’ concerns: The drought

Khanna reiterated that message during last week’s event, “Politics and the Dinner Table,” sponsored by the Center for Urban Education about Sustainable Agriculture (CUESA), which was planned when the organizers expected that Hillary Clinton would be the new president. What had been planned as a strategy session for how to persuade sane government leaders turned into more of an encounter group, and a training exercise in how to deal with an unpredictable, highly volatile, and perhaps outright dangerous administration that has promised to wreak havoc on many of the goals and initiatives championed by the participants.

“What gives me hope is knowing that all around the country there are people working for the kind of food system we need.”
The problem, they agreed, isn’t just that president-elect Trump has said he’ll gut environmental regulations, deport millions of people, and move money out of effective farm programs. A bigger challenge is coping with unknowns. In interviews soon after Trump’s victory, food movement leaders seemed shell-shocked and confused. But soon enough, they were thinking about hard strategy, and in particular about strengthening local efforts.

“What gives me hope is knowing that all around the country there are people working for the kind of food system we need and those people are not going to step back and let this administration roll back our progress,” Anna Lappe, a food activist and the panel’s moderator, told me soon after the election. By last Wednesday, she, like most of the others, was talking less about the incoming Trump administration, and more about what can be done locally. One thing she mentioned: finding “sustainable sources of revenue for communities that will be impacted the most” by a new administration. For instance, if the SNAP program is hollowed out, state and local officials and others must step in to make up the difference. Lappe cited the recently passed taxes on sugary drinks in San Francisco, Oakland, and elsewhere as one example–as long as the proceeds are used to help local communities.

At the same time, there’s only so much that can be done on the local political level. The future administration could do a lot to hurt the food movement and the food business in general, on a number of fronts: mass deportations, cutting budgets at USDA, enacting protectionist trade policies that would stunt farmers, installing zealots in key positions to cut back on labor and environmental regulations. Trump’s stated belief that climate change is a “hoax” certainly doesn’t bode well for progress on that front.

“We need to step into the breach.”

But activists need to take advantage of whatever options they’re left with.

Journalist and Berkeley professor Michael Pollan also mentioned the soda taxes in an email interview– “not trivial,” he said. Whatever anyone might think of taxing soda or banning GMOs, those are widely considered to be food-movement successes when they are implemented, and they do indicate that progress can be made on such issues.

“We need to step into the breach,” said Michael Dimock, president of Roots of Change. With soda taxes, “the marketplace decided that these things are valued. It indicated that there’s public support for what we do.”

Public support in the San Francisco Bay Area, anyway, which Hillary Clinton solidly won. On the other hand, as Nina Ichikawa of the Berkeley Food Institute noted at the panel talk, efforts to strengthen sustainable and organic food and farming isn’t just for cities. The main effect is to improve “rural development.” In fact, such efforts are “saving communities,” she declared. 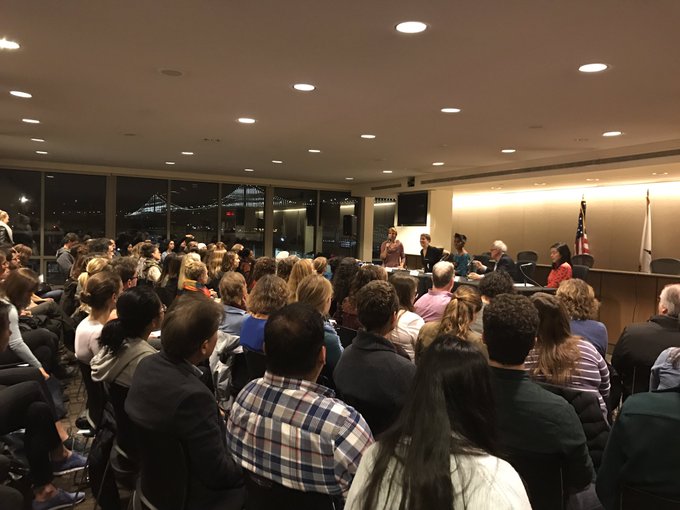 But the trees are as important as they were before Trump came along, and some of them are likely to be felled, or at least radically trimmed. “Our biggest fear is the immigration backlash,” Oliva said. During the campaign, Trump promised to “round up” and deport all undocumented workers in the United States. After the election, he told 60 Minutes that, for the time being, he’ll concentrate on the 2 to 3 million he says “have criminal records.” (He got this number wrong.)

Deporting that smaller number (smaller than “millions and millions,” at least) probably wouldn’t do much harm to agriculture or the food business, but if were to go much further, it certainly could. Nearly half of all U.S. farmworkers are migrants, according to the some of the most recent data available (this is a difficult number to pin down). “The repercussions won’t be felt only in the fields of California or South Florida,” Oliva said. “It could destroy the very fabric of the industries that depend on immigrant workers,” including meatpackers, manufacturers, the restaurant business, and pretty much every other part of the food industry.

Nobody, however, is particularly optimistic about what the incoming Trump administration might do.

But it might be worst for farmers in particular, Dimock said, and in California specifically, where they are already coping with new laws on paying overtime and a statewide minimum wage. Deportations would amount to a “triple whammy” for them, he said. “It would be a devastating blow.”

If Trump fulfills his promises to restrict trade, the result would be a quadruple whammy, given that about 40 percent of California’s crops are exported each year. Nationwide, that figure approaches 25 percent. Any substantial restrictions on trade will hurt farmers across the country, and state governments can’t do much about that.

On other issues, however, lobbying state and local governments could yield real progress. Dimock is hoping that a statewide tax on sugary beverages, which failed this year, will be passed next year. The success of many municipal taxes in California and around the country bodes well, he said.

Fall colors can be just as bright as summer's! Multicolored cauliflower from @newfamilyfarm today 💜💛❤️

The California Assembly and state legislatures and local bodies around the country are likely to see many more food-movement lobbyists than they’re used to. That’s especially true if Trump takes a knife to USDA’s funding for programs that help farmers, and small farmers in particular. “Those programs have been a stimulus to the small-farm economy,” Dimock said, citing in particular the New Farmer Program and initiatives like Know Your Farmer, Know Your Food. If they are cut or eliminated, states will be pressured to make up the difference. The challenge there, Dimock said, is that in California, for example, only about 15 percent of what the state spends on programs to support agriculture comes from state taxes. Most of the rest comes from the federal government.

During the CUESA talk, Mark Lipson, a farmer, researcher, and former USDA policy advisor, urged attendees to monitor USDA’s website for changes to those programs. “There are nearly half a billion dollars in grant programs for local initiatives there,” he said. “Nearly all of that can be very systematically rolled back.”

On other fronts, such as environmental regulation, success might come somewhat more easily. In California, at least, “we do have many good policy leaders who tend to support the kinds of work and efforts that we are taking,” said Ann Thrupp, executive director of the Berkeley Food Institute.

The election gave us “a situation that is very ripe, and anything can happen.”

California, Thrupp added, can also serve as a model for the rest of the country. Success in the state “can help demonstrate that such approaches work well and have positive outcomes for farmers/producers as well as consumers,” she said. It’s also a way “to resist what is happening” in Washington, whatever that turns out to be.

Nobody, however, is particularly optimistic about what the incoming Trump administration might do. “We cannot expect that local and state approaches will solve the problems or address threats we face as a nation,” Thrupp said. And while working around the Trump administration will be necessary and even helpful, national policies can undermine or deter local and state efforts, so we need to continue to pursue ways to address the power at the federal level.”

One way to do that is to join up with national efforts, she said. “We should coordinate with the National Sustainable Ag Coalition, Plate of the Union, and others in D.C. who are already scheming approaches and join such efforts in solidarity. We must continue to be engaged in national-level policy discussions, organizing, collaborating, sharing information, and political action when possible.”

There is one bright spot to having Trump as president, Dimock said (while emphasizing that he and everybody else in the movement would have greatly preferred that Clinton had won): the election showed that voters “wanted a change agent.” Trump’s election was a “radical decision” that gave us “a situation that is very ripe, and anything can happen.”