Many food producers pivoted to online sales during the pandemic. Post office problems threw a wrench in their plans. Unexpected slowdowns at USPS have been especially costly for small farmers, restaurants, and food producers who rely on shipping to both purchase supplies and fulfill orders.

When the coronavirus pandemic shut down restaurants across the country this spring, Jeff Rieger of Penryn Orchard Specialties, a small fruit farm in Placer County, California, did what many small farmers did—he started selling directly to consumers. He updated the website, figured out new ways to pack his fruit for consumers, and invested in shipping software. He was starting to build a new customer base when, without warning in July, everything went haywire.

“Packages down in L.A. just disappeared. I had boxes going all over the place. And I was refunding customers,” Rieger said.

Rieger later learned that was the week Postmaster General Louis DeJoy disabled sorting machines in some mail centers in the Los Angeles area. The USPS also began prohibiting overtime and extra trips and mandated that all trucks leave the facility on time—regardless of whether all the mail had been loaded. It also was removing or locking drop boxes. The agency maintained the changes were to improve efficiency, but critics saw it as an attempt by the Trump administration to privatize mail service or even try to disrupt mail-in voting for the 2020 presidential election.

These changes affected most Americans. People across the country suddenly saw delays on everything from paychecks to medications. Packages and bags full of letters that weren’t loaded in time were left on the docks and service was backed up for days. In south Los Angeles, packages were delayed for so long that workers found rodents and insects infesting boxes of rotting food.

For some small farmers like Rieger, who counted on the service to run their businesses, the delivery problems led to products going bad in transit, lost revenue, and frustrated customers. The problem was particularly acute for food producers who had lost their regular restaurant customers during the pandemic and spent significant time and resources trying to pivot to online sales.

Many small food companies had to take on a new round of logistical and financial headaches when services like package tracking were disrupted. “We have staff that does the customer service. So for us it’s very expensive to get the call to ask where their package is if it looks like we never shipped it,” said Steve Sando, the owner of Rancho Gordo Beans in Napa, California.

“Initially you could count on an overnight shipment getting there overnight.”

These kinds of problems weren’t confined to USPS. Small food producers who contracted with UPS were also experiencing problems, in part because at the beginning of the pandemic UPS announced that it would no longer guarantee on-time delivery for its packages, perishable or not.

“Initially you could count on an overnight shipment getting there overnight,” said Madeleine Coggins, the Trade Marketing Associate for Laura Chenel, a goat cheese company in Sonoma, California.

When the pandemic shut down the restaurants her company sold to and markets began stocking more staples in place of specialty items, Chenel partnered with two other dairy companies in the area, Marin French Cheese and St. Benoit. They opened an online store called North Bay Creameries. Business picked up, but because of shipping delays, the partners had to switch all shipments, including those to local customers, to the more costly one- and two-day services. In the past, many producers relied on the USPS’s two- to three-day shipping rates, which allowed them to send perishable items at a price that many of their customers were willing to pay for the highest quality produce.

With restaurants across the country slowly re-opening, small farmers who sell directly to eateries have to get their crops to those clients on-time and before anything rots. In the past, many of these producers have relied on the USPS’s two- to three-day shipping rates, which allowed them to send perishable items at a price that many of their customers were willing to pay for the highest quality produce.

“If the restaurant is doing food prep for the weekend on Thursday, I need to get the fruit to them on Thursday,” Rieger said. “Friday could be ok. But if it doesn’t arrive until Monday, that’s not going to work.”

But current policies have put that system in jeopardy. Moreover, an increase in orders from large companies like Amazon have stretched carriers to the point where their services are sometimes not fast enough for shipments like produce—at least not at a price that many small farmers and restaurants can endure.

“When you’re shipping, say, fifteen hundred dollars of cheese, and you have to re-ship a good portion of that, that is a huge loss for a small producer.”

UPS representatives said that many delays this past summer were due to the massive increase in e-commerce and demand for residential delivery, which requires more unique stops than deliveries to commercial buildings. And, UPS has never guaranteed the safe delivery of perishable goods, though it does allow customers to send a variety of live animals, including bees, mollusks, and fish. (Day-old poultry, live birds, bees, and small cold-blooded animals can all legally be sent through USPS, though there have been scattered reports of baby chicks arriving DOA due to post office slowdowns.)

To deal with these problems, some producers have limited their business to regional or local customers, but this hasn’t made them immune from shipping problems. They still rely on USPS and UPS to deliver the goods they need to run their businesses.

“The thing that hurt us at the beginning was getting supplies,” said Chris Gangi of Kreeky Tree Farm in Slatington, Pennsylvania, who only sells his fresh eggs, poultry, and baked goods to local customers. “The plastic gloves, vacuum-pack bags …. You’d order something and it wouldn’t show up for two, three weeks. And you needed it yesterday. So that was totally unreliable.”

Others have switched to much more expensive shipping methods. At Birchrun Hills Farm, a small dairy farm and cheese maker in Chester County, Pennsylvania, proprietor Sue Miller and her family shifted to sending all of their cheeses through FedEx’s next-day express service after losing too many shipments through UPS’s overnight service and FedEx’s two-day service.

“This winter, we will evaluate how it’s going and think about how we want to approach next year.”

“When you’re shipping, say, fifteen hundred dollars of cheese, and you have to re-ship a good portion of that, that is a huge loss for a small producer,” she said. She now pays somewhere around fifty dollars a box to ship her goods across the country.

Heading into the fall, some producers noted that deliveries have been more consistent than they were earlier in the pandemic. Some of the problems at USPS have been addressed by court orders that mandated that DeJoy restart some previously disconnected processing machines and reinstitute the extra trips employees make to ensure timely mail delivery. UPS, for its part, has hired 39,000 new workers.

But many small food producers are concerned about what the busy holiday season will bring. Rancho Gordo does 25 percent of its annual business in November and December, and even though most of its packages are currently being delivered on time, Sando is still worried that increased holiday traffic or a disputed election could mean more delays. “It’s the not knowing that’s so frustrating,” he said.

Jeff Frank, of the small farm Liberty Gardens in Coopersburg, Pennsylvania, has the same concerns now that UPS no longer guarantees on-time delivery. Before the pandemic, Frank shipped most of his vegetables to restaurants in New York City and had tried a number of different shipping services before settling on UPS. But with the policy change, he’s not sure how he would get his vegetables to his customers.

For now, he is selling only to local customers, but these sales only make up for a small fraction of the farm’s lost revenue. “This winter, we will evaluate how it’s going and think about how we want to approach next year,” said Frank. “But as everyone is telling you, who knows what next year holds? It’s hard to make plans when the future’s so uncertain.”

Georgia Freedman is a freelance journalist and editor based in the Bay Area. Formerly the managing editor of the food magazine Saveur, Georgia has written for the Wall Street Journal, Food & Wine, Afar, Martha Stewart Living, and many other publications. She is also the author of the cookbook Cooking South of the Clouds—Recipes and Stories from China’s Yunnan Province (Kyle, 2018). “We’re not going to wait for something to happen:” This is what it’s like to open a new restaurant in a ‘ghost town’ Just how safe are outdoor dining tents? Sorry to pop your plastic bubble, but it depends. 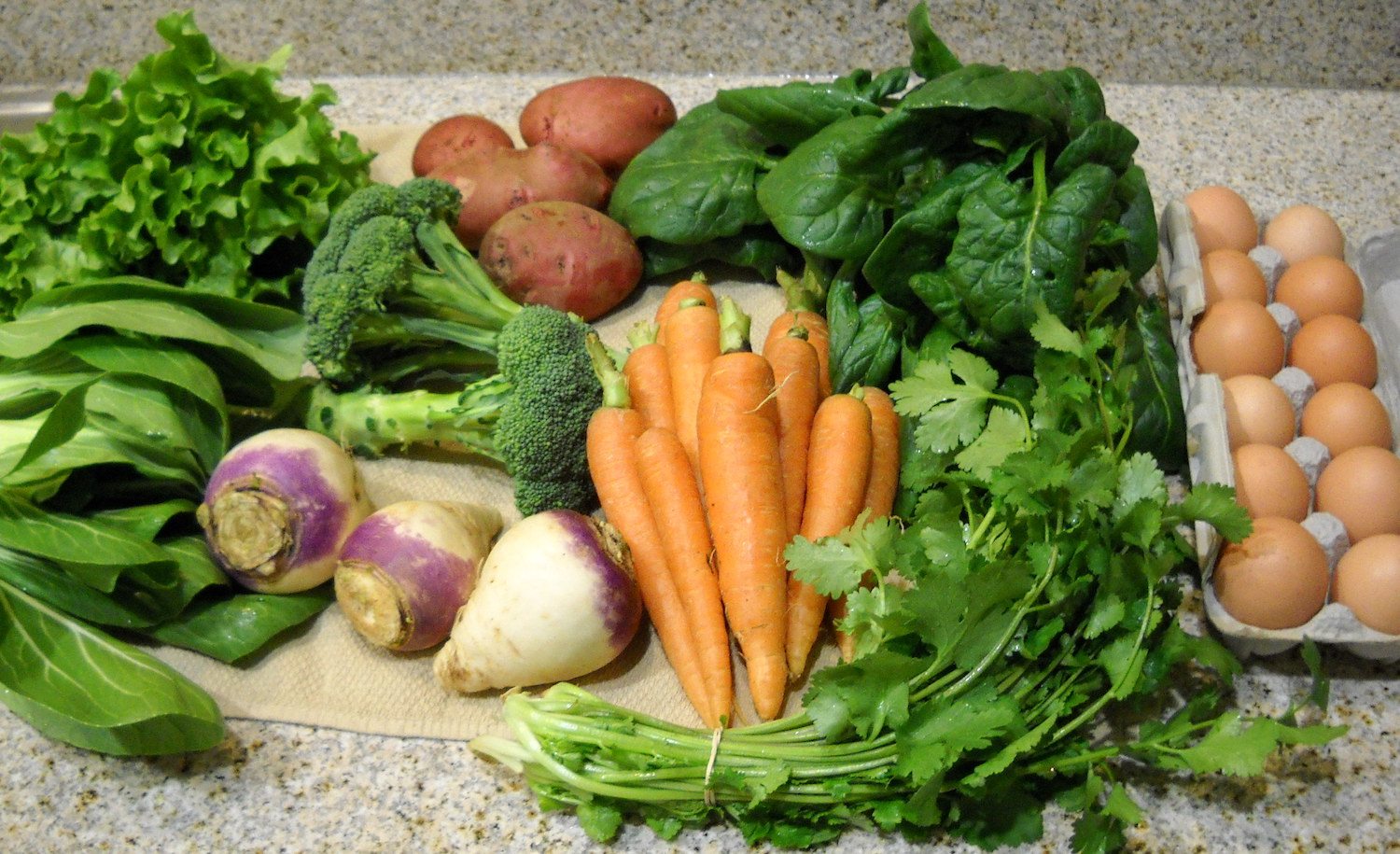 Here’s why CSAs were in trouble before the pandemic