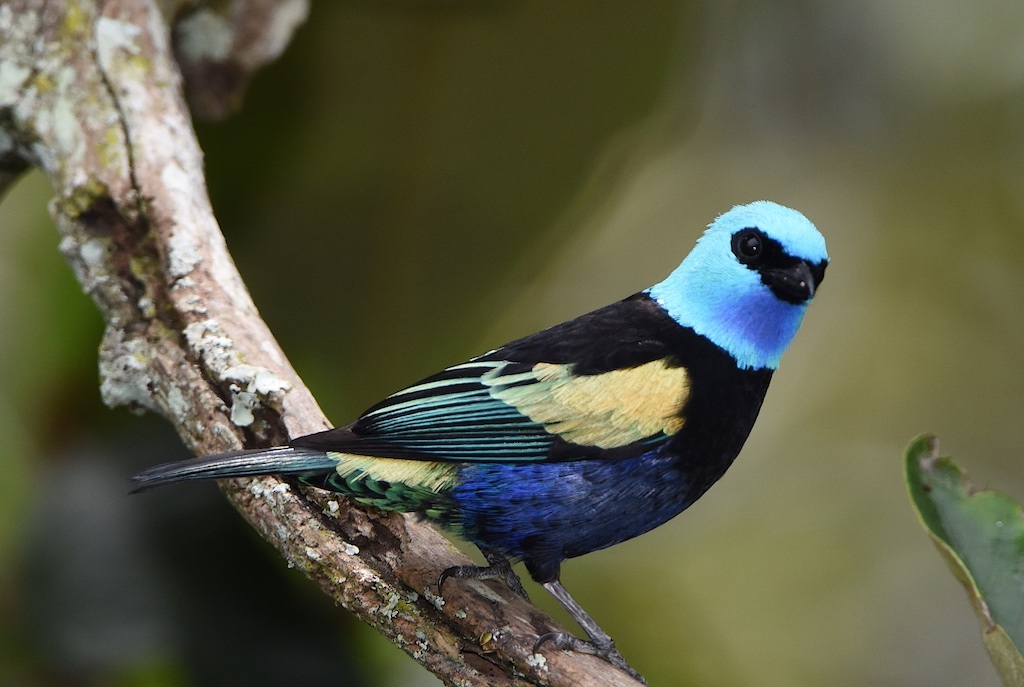 New research shows a “shade-grown” designation is more complicated than you may think.

Shade-grown coffee has long been touted as an eco-friendly alternative to the more ubiquitous, commercially farmed stuff. In essence, the designation attempts to indicate that coffee plantations weren’t built by clear-cutting forests and ravaging local ecosystems.

But coffee farming is a lot more complex than this rule-of-thumb may suggest. New research finds that our country’s only federally-funded coffee certification program may need to reevaluate what truly sustainable farming looks like. In particular, scientists are discovering, we need to listen to the birds.

Pictured above: The blue-necked tanager is a bird found in South America and often on shade-grown coffee farms.
First, let’s back up a bit: At the consumer level, if you’re like me, you probably don’t really question where your beans come from or how they’re grown—so long as you get your caffeine fix. Our inexpensive, get-the-job-done roasts often come from farms based in South America, Africa, or Asia—specifically the kind that rely on full-sun farming. And that method, like much modern agriculture and human activity, is bad for migratory birds.

As its name suggests, full-sun farming requires that producers deforest large plots of land for the sake of growing coffee plants and harvesting the crop at high yields. This leaves birds who winter in the southern hemisphere with fewer forests to feed and house themselves. In 2014, researchers found that full-sun coffee farming makes up 76 percent of total cultivated area, and that number is on the rise.

As an alternative, there’s traditional shade-grown coffee, which is produced underneath a forest’s canopy. But “shade-grown” isn’t an official designation, and there are no criterion or oversight body governing the term’s use on coffee labels (though private certifiers like Rainforest Alliance do have shade requirements for their producers). As a result, countless brands, including Nestle, Starbucks, and Dunkin’ Donuts have tried to cash-in on the vague goodwill that the term “shade-grown” evokes. There is, however, one federally-funded program that certifies shade-grown coffee according to science-based ecological standards. Called Bird Friendly, the certification is run by the Smithsonian Migratory Bird Center of the Smithsonian Institution, a national network of museums and research centers. The program was founded in the 1990s to promote coffee farms that conserve habitats for migratory birds. Of the 1,027 species covered by the Migratory Bird Treaty Act, 92 are threatened or endangered, and another 274 are at risk of becoming endangered in the absence of conservation efforts, according to the Fish and Wildlife Service. To qualify, farms must meet a long list of bird-friendly criteria pertaining to details like canopy height, structural diversity, USDA organic certification, and more.

But just how effective is Bird Friendly? According to new research published in Biotropica, a journal of conservation science, the program has room for fine-tuning.

Currently, Bird Friendly requires farmers to plant multiple types of trees, and it encourages them to prioritize native ones. What exact species get planted, and in what numbers, is largely up to farmers to decide. However, all trees are not equally beneficial to migratory birds, says Doug Tallamy, a professor at the University of Delaware whose team is behind the recent findings. At the root of these differences is the fact that bugs, the main source of food for birds, will not simply settle on any old tree.

“Most animals do not eat plants—they eat the things that eat plants, and those things are mostly insects,” explains Tallamy. “Most insects […] can only eat the plants they have coevolved with.” Tallamy wanted to know which trees Bird Friendly farms were planting, and whether birds had preferences among them. To do so, he conducted bird-watching observations at two Bird Friendly-certified farms, one in Nicaragua in January of 2015 and two in Colombia in January of 2015 and January of 2016. At both farms, his team selected multiple tree species to observe for 10-minute periods of time, twice daily, for a full month. During these observation periods, trained bird-watchers recorded bird behavior, including species present and time spent foraging.

What Tallamy’s team found is that birds prefer certain species of trees, are impartial to others, and at times, they even avoid specific varieties. To Tallamy, this suggests that Bird Friendly criteria should incentivize coffee farmers to plant trees that migratory birds prefer.

“We can’t expect the growers to do that if we don’t rank them, and say, ‘here are the best ones and here are the ones that are not so good and here the ones you should totally avoid,’” he says.

Tallamy’s team found that birds prefer certain species of trees, are impartial to others, and at times, they even avoid specific varieties.
Robert Rice, one of the co-founders of the Bird Friendly program and a scientist at the Smithsonian Migratory Bird Center, is open to the idea of adapting the program. (Rice helped secure a Disney Conservation Fund grant to help finance Tallamy’s study.) Under his tutelage, Bird Friendly coffee has gradually risen in prominence. In 2009, 1,080 producers participated in the program, producing over 6.1 million pounds of Bird Friendly coffee. Last year, over 4,600 producers were producing 19 million pounds of certified product.

However, Rice stressed that any changes to Bird Friendly ought to maintain the autonomy of small-scale farmers. After all, the program was founded to acknowledge producers who operate coffee farms in harmony with nature, not to micromanage the details.

Indeed, most farms that qualify for Bird Friendly are small-scale producers, and for them, trees can double as an extra source of income. “Like any monoculture, if prices go through the basement or if bad weather comes in that ruins the crop in some way or disease comes in and hammers the crop, then you know, you’re just out of luck,” Rice says. “So it just so happens that these small producers are these guardians of biodiversity.”

Oswaldo Acevedo is one such guardian. A fourth-generation coffee farmer based in Santander, Colombia, Acevedo’s Bird Friendly-certified farm is 300 hectares in size (740 acres), featuring about 60,000 shade trees. He says he produces shade-grown coffee because it’s better for birds, and thus, better for the future. As a bonus, it also helps mitigate environmental impacts linked to global warming. Acevedo’s shade trees provide an economic boon to his business right now. Every 21 years his farm replaces old shade trees, which are sold as lumber or get turned into furniture by local interior designers. As global coffee prices are currently plummeting, Acevedo’s goal is to convert his shade-tree-turned-furniture side hustle into a viable long-term revenue stream.

Rice’s point is that changes to the Bird Friendly-program—such as the prioritization of certain tree species or others—should consider operational and economic difficulties that small-scale coffee farmers face.

That being said, the very trees that are good for birds may be simultaneously beneficial for farmers. Tallamy’s study highlighted the appeal of nitrogen-fixing, leguminous species. These can absorb nitrogen in the air and transfer it to the soil, making it more fertile. And by inviting more birds onto coffee farms, producers are getting pest control services in return.

These intricate and intersecting relationships still require a lot more research, though. In this study, Tallamy’s team looked at the ways that birds interacted with trees. Up next, he wants to get a closer look at how birds interact with insects, as part of a larger inquiry into what exactly they want. All we know for now is that it’s more than just shade.