EPA just conceded that its 2018 approval of dicamba was politically motivated. But the Biden administration can still change course.

Pictured above: Lyle Hadden, a soybean farmer, walks through a field that shows signs of being damaged by dicamba.

On March 10, Michal Freedhoff—a newly appointed senior official at the Environmental Protection Agency (EPA)—sent an alarming internal memo to staff. Writing in her capacity as acting head of EPA’s Office of Chemical Safety and Pollution Prevention (OCSPP), she told colleagues that senior agency leadership and White House staff had sometimes interfered with OSCPP’s scientific findings under the Trump Administration. That interference, she wrote, led EPA to distort the science on multiple occasions—a recent history that has “undermined the agency’s scientific integrity policy and eroded the trust that the American public has in EPA.”

Among other examples, Freedhoff specifically drew attention to EPA’s handling of dicamba, a potent herbicide that has divided rural communities and stirred controversy on Capitol Hill. Farmers who buy the genetically engineered (GE), dicamba-resistant soybeans and cotton developed by agrochemical company Monsanto—now owned by the pharmaceutical multinational Bayer, which completed its purchase of Monsanto in 2018 and phased out its name—can spray the weedkiller with abandon, eliminating unwanted plant species without hurting their crop (at least in theory).

But dicamba has been shown to “drift” away from targeted areas, damaging non-resistant soybeans and ruining other crops on neighboring farms. Farm and environmental groups sued EPA in federal court for approving this use of dicamba, alleging the agency had unlawfully discounted dicamba’s drift threat. After lengthy proceedings involving detailed briefs from the non-profit groups, EPA, and Monsanto, a federal court ruled in favor of plaintiffs in 2020, reversing EPA’s approval based on six major violations of pesticide law. Yet in the fall of 2020, the Trump administration’s EPA re-registered the dicamba products, thus permitting farmers to use them for another five-year period before further review.  The non-profits are again suing EPA to reverse this decision, arguing that the 2020 court decision makes the Trump Administration’s recent re-approval unlawful.

Now, thanks to Freedhoff’s memo, we know that EPA leadership directed career staff to cherry-pick the data on dicamba, resulting in the flawed decision to approve it back in 2018. And though some former EPA staff disagree with Freedhoff’s characterization of the agency’s scientific decision-making under Trump, other current and former staffers, including a past EPA Administrator, feel the letter signals a return to science-based policy in the public interest.

Either way, the EPA under President Biden faces a conundrum: How should it handle the recent regulatory determinations that it concedes were unduly influenced by political pressure? In an op-ed, Bill Freese, science director for the nonprofit Center for Food Safety, the lead plaintiff and counsel in the dicamba litigation, makes the case for reversing the Trump administration’s dicamba approval decision.

Among the many challenges facing the new Biden Administration is righting the regulatory wrongs of its anti-science predecessor. The incoming EPA has taken a welcome first step in this direction by making public a “scientific integrity” memo acknowledging that political interference has previously corrupted the agency’s science on numerous recent occasions.

One of three illustrative examples cited in the memo involves dicamba, a plant-killing pesticide (a.k.a. herbicide) that EPA originally approved for use on global agribusiness company Monsanto’s genetically engineered (GE), dicamba-resistant soybeans and cotton in late 2016.

The following two years saw historically unprecedented levels of “off-target” plant damage, as dicamba formulations produced by Monsanto and two other companies drifted rampantly from sprayed fields to injure all manner of crops, orchards, gardens, trees, and wild plants on millions of acres throughout the Midwest and South. Echoing many of his colleagues, North Dakota pesticide specialist Andrew Thostenson stated: “We are in unprecedented, uncharted territory. We’ve never observed anything on this scale since we’ve been using pesticides in the modern era.”

The Obama EPA had incorporated a sunset clause whereby the three product approvals would automatically expire after two years if drift damage (which it had suspected might occur) proved to be too extensive, as it most certainly was. Unsurprisingly, Trump’s EPA rejected this option, and instead re-upped the approvals for two more years in late 2018. The Trump EPA claimed that minor changes in usage instructions would take care of the problem. But the changes proved useless. Dicamba drift damage was as bad or worse in 2019 and 2020.

If EPA’s working scientists had been allowed to follow the science, free of political interference, the dicamba formulations might never have been re-approved, and innumerable farmers would have been spared two more years of losses.

It is this 2018 re-approval decision that the memo excoriates, stating boldly that EPA “senior leadership” had directed career staff to discount critical data and studies on dicamba as well as “scientific information on [its] negative impacts.” If EPA’s working scientists had been allowed to follow the science, free of political interference, the dicamba formulations might never have been re-approved, and innumerable farmers would have been spared two more years of losses.

Instead, it took watchdog nonprofits and a federal court to do EPA’s job for it. In a lawsuit brought by farming and conservation groups (including my own, Center for Food Safety), after several years of litigation, the Ninth Circuit Court of Appeals rescinded EPA’s approvals of the three dicamba formulations in June of 2020. The Court’s emphatic ruling reflected how egregious EPA’s violations of pesticide law had been. Among six major findings, the Court noted the “enormous and unprecedented damage” caused by dicamba drift, and the extraordinary fact that “EPA refused to quantify or estimate the amount of damage … or even to admit that there was any damage at all.”

Among many parting “gifts” left us by the Trump administration, sad to say, is the resurrection of the Court-rescinded dicamba products for five additional years—an action that Center for Food Safety and its allies are already back in court challenging. It remains to be seen how the Biden Administration will respond.

In deciding on next steps, EPA Administrator Michael Regan and his staff will have to consider the extraordinary damage dicamba has caused. That will require grappling with the fates of people like John Seward, of Aurora, South Dakota, who has seen his vegetable farm devastated several times by dicamba drift, and may be forced to give up his dream of farming as a result. And Bill Bader of Missouri, whose peach orchard, the biggest in the mid-South, was severely damaged by wave after wave of dicamba drift over years. And beekeepers like Richard Coy, who endured a 50 percent drop in honey production thanks to dicamba’s destruction of the flowering plants his bees require for nectar and pollen, and consequently was forced to move his operation out of Arkansas. And the 200 Minnesota soybean farmers who collectively suffered $7 million worth of yield losses. And the Arkansas growers whose soybeans were so badly damaged by dicamba that university weed scientist Jason Norsworthy stated they would yield at best 5 rather than a typical 50 bushels per acre.

Among many parting “gifts” left us by the Trump administration, sad to say, is the resurrection of the Court-rescinded dicamba products for five additional years.

These are just a small sampling of cases, and none of them are in any way acceptable. Still less is the dispute over dicamba damage that resulted in a gunshot death on the Missouri-Arkansas border, or the many other episodes of drift-induced social strife that, in the Court’s words, “has torn apart the social fabric of many farming communities.”

EPA would also be well advised to reject the propaganda of Monsanto and its Big Ag buddies. First, state investigators have left no doubt that the great majority of dicamba damage is in fact due to the formulations approved for use on GE crops, not the older, supposedly more risky  formulations. Second, even Trump’s EPA found that the dicamba crop system does not increase yields or facilitate soil conservation. And that same EPA identified numerous alternatives to dicamba among the dozens of herbicides registered for use on soybeans and cotton. And as for spray-resistant “superweeds,” which dicamba is supposed to neutralize—no, dicamba will not meaningfully forestall resistance to other commercial weedkillers, which can only be achieved by lessening farmers’ overall dependence on herbicides. This clever talking point is designed to obscure the real issue, which is the rapid emergence of dicamba-resistant weeds from overuse of dicamba on Monsanto’s GE crops, which already comprise about 60 percent of the nation’s soybeans and 70 percent of its cotton. In short, the sky will not fall if EPA does the right thing and reverses the prior administration’s dicamba approval decision.

“This is a new day, about communication, trust, transparency and the importance of science in our regulatory decision-making process.”

Good things, however, would certainly follow. First, it would offer relief for those with repeatedly damaged crops. Second, those many farmers who have purchased Monsanto’s pricey dicamba-resistant seeds simply to avoid crop injury, for self-protection (pp. 56-58)— compared by one farmer to extortion—will regain the “freedom to farm” the seeds of their choice, and save money to boot. (Monsanto consciously exploited the dicamba drift threat as a means to sell dicamba-resistant seeds “for protection from your neighbor.”) Small seed firms that sell those alternative seeds will also benefit by regaining customers they lost to Monsanto. University soybean breeding centers—which are fonts of innovation for critical new traits like disease resistance and drought tolerance not provided by Monsanto and its ilk—will no longer see their experimental plantings ruined by dicamba drift. And most important, those brave farmers who diversify the monocultural Midwestern landscape of corn and soybean fields by growing fruits and vegetables will once again be able to farm without fear of seeing their livelihoods devastated by this herbicidal menace.

The EPA memo’s author, Dr. Michal Freedhoff, announces: “This is a new day, about communication, trust, transparency and the importance of science in our regulatory decision-making process.” Let’s start that new day by clearing the rural skies of deadly dicamba.

Bill Freese is scientific director at the Center for Food Safety (CFS), a national non-profit public interest organization. Freese has written and lectured extensively on the science, regulation, and societal implications of agricultural biotechnology and pesticides, and is a frequently quoted expert in mainstream media as well as the scientific press. Bill holds a B.A. in chemistry from Grinnell College. 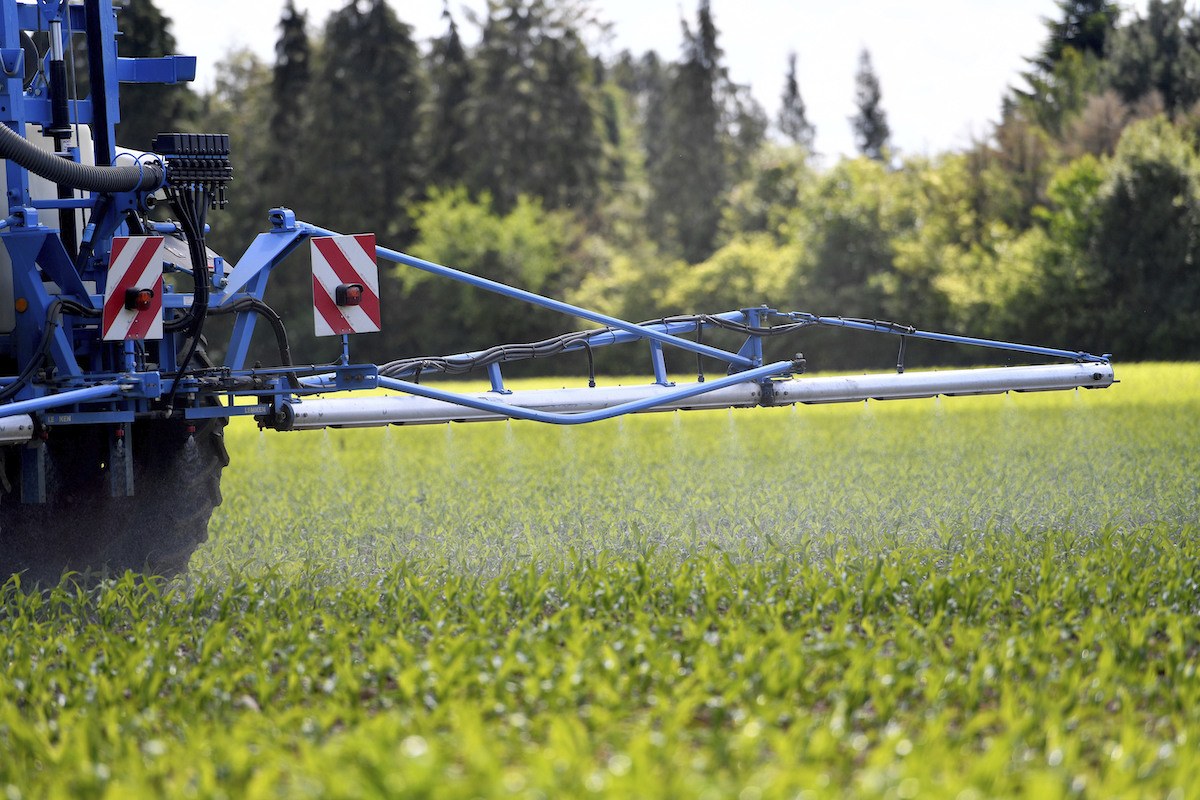