Susie Hojel makes a crunchy condiment her fans liken to a drug. Problem is, she can’t make it fast enough. What’s next? Our experts accept the challenge

Everything (well, almost everything) looks good for Susie Hojel. Her product, Chile Crunch, an homage to the salsas Hojel ate as a child in Mexico City, has developed a serious following—even though people aren’t totally sure what it is. The Wall Street Journal pegged it as somewhere between a tapenade and a “crunchy sauce,” while devotees pile it on almost anything: grilled meat, fish, guacamole, eggs—even edamame.

Hojel’s got the kind of exposure most foodmakers would envy. But customer love and retail response quickly become a liability if you can’t produce fast enough to get ahead of them.

Retailers would be happy to feed their addiction, but Hojel has a problem. She can’t make as much as they want. Her unique recipe has her in a tough spot: She can’t turn it over to a co-packer (as hard as she’s tried), and she feels like she’s maxed out on what she can accomplish in the Denver commercial kitchen where she and an assistant slave for seven hours a day, three days a week.

On the one hand, it’s a good problem to have. Hojel’s got the kind of exposure most foodmakers would envy. Whole Foods stores in Denver and Boulder carry Chile Crunch, and she does demos a few times a week at local farmers’ markets. But customer love and retail response quickly become a liability if you can’t produce fast enough to get ahead of them. Her existing retail contracts this summer—stores in 18 states, plus online orders through her Web site—were about all she could handle. And that’s, of course, the moment Williams Sonoma came calling with a large private-label order.

“Williams-Sonoma’s first order was for 500 cases [with 12 jars per case],” Hojel says, “and they were very accommodating when I said it would take me three months to produce that many jars.”

Hojel now finds herself at a crossroads. On the one hand, she’s overworked. She logs long hours in a commercial kitchen three days a week, and along with a helper, makes each batch of Chile Crunch by hand. This requires sautéing seven ingredients—roasted chilies, onions, garlic and spices—in canola oil, a slow process that yields only about eight 30-jar batches in a seven-hour shift. After three days’ labor in the kitchen, Hojel comes away with about 740 jars of product. “I’ve been making as many jars as I can,” she says—16,000 jars since January 1, 2015. 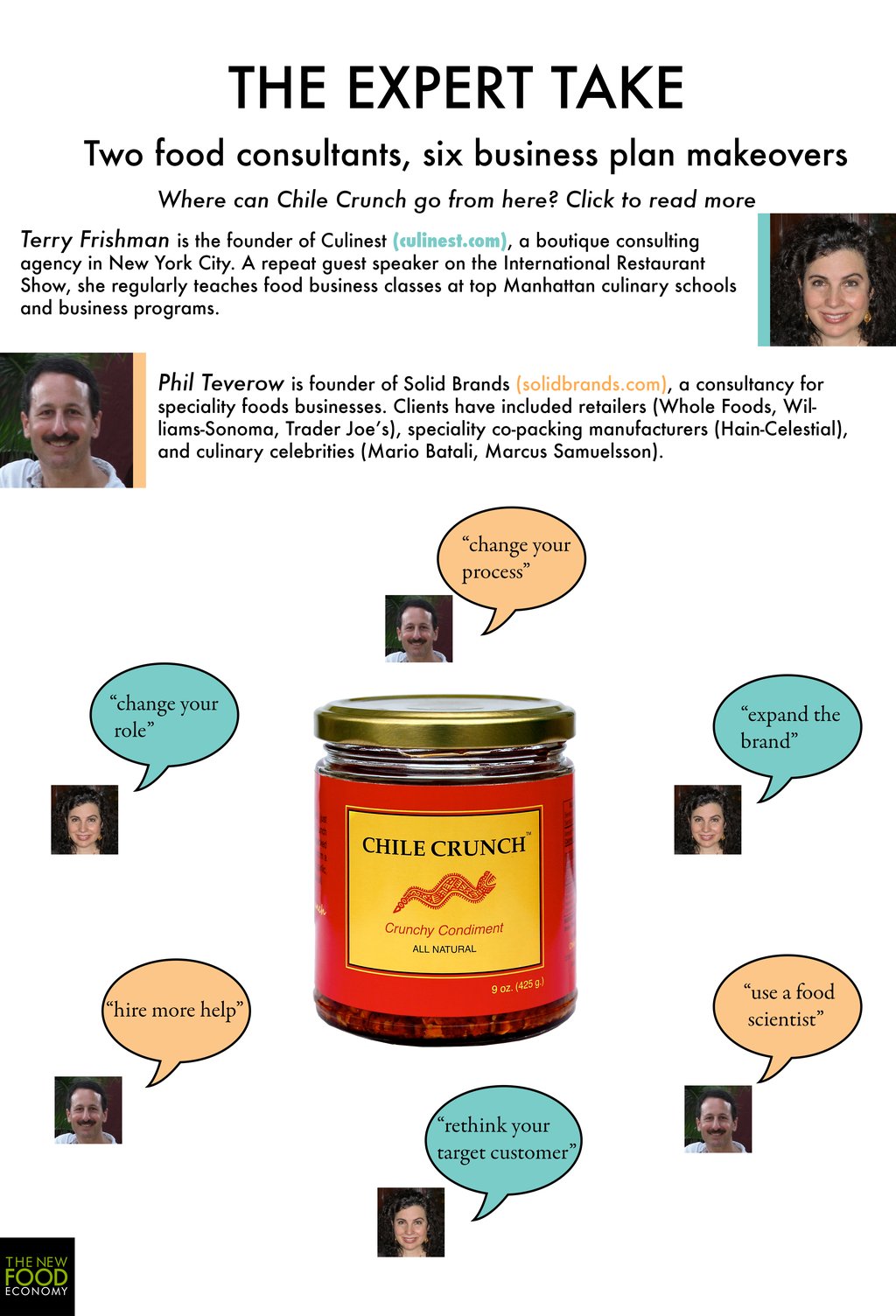 “I am living and breathing Chile Crunch,” Hojel says. “I get up, I’m at the computer at 6 AM, trying to answer emails. It’s a one-woman show. When I cook, I get up at 4:30 AM, and my shifts are from 6 AM to 1 PM in the kitchen three days a week.” On the other hand, scaling up and automating production has been much more difficult than she anticipated. The question remains: to grow or not to grow? Hojel estimates that she’s talked with 30 to 40 co-packers across the country, but nobody’s been willing to take her on (at least not yet). “Chile Crunch is cooked at a very high temperature in oil, which keeps cooking and it’s very slow to cool,” she says. “You can’t get it out of the pot fast enough. If I increase the amount of ingredients to make more jars, by the time I get everything out of the pan, the Chile Crunch is burnt. The hot oil is the problem for the co-packers.” The cooking time alone for one batch is 35 to 40 minutes. Hojel buys the ingredients in bulk, but she’s still the one running garlic through the food processor.

Then there are the margins, which are frustratingly low. “My biggest obstacle really is how to increase production so I can bring the price down,” Hojel says. “When I started this I wasn’t thinking too far ahead. I had my costs wrong. It’s an
expensive product with a small profit margin, and all sorts of costs you don’t think of—boxes for shipping, overhead, $2 million liability insurance…it adds up.”

At this point, Hojel is able to support herself from the income she makes by selling Chile Crunch. As someone with no previous food industry experience—Susie was a jeweler and a painter before starting her company—she’s happy with how far she’s come. Still, if she can’t increase production and get her margins under control, she won’t be established enough to attract (and retain) bigger retail accounts.

“Williams-Sonoma and Dean & DeLuca have been fabulous; I’m so grateful that they took a gamble on me,” she says. “But a large-scale wholesaler wants to make sure that you’ve been in business for a while, that you aren’t just going to disappear overnight, and that you can provide large quantities of your product.”

Which, as things stand, she can’t.

So what’s the best thing to do? The best thing, that is, outside of waiting for someone to invent time travel, so she can go back and make a bunch of better decisions when they count—before going to market? There are some obvious possibilities: keep hunting for a co-packer, keep the same process but hire some more folks to help her, reformulate—especially for the private label part of the business, or launch a new product and use Chile Crunch as a door opener. Maybe she should leave things just the way they are.

Ok, seriously, Chile Crunch is the best condiment. @CulinaryTrends thinking of you as I breakfast on two soft boiled eggs and @chilecolonial

What sounds right to you? Let us know through the comments section. Hojel will be watching. One way or another she’s not going anywhere. “When you’re doing a one-woman show, it’s a challenge,” she says. “It helps keep you young and it’s fun. I’m in my 60s and sometimes I think, why didn’t I do this when I was younger?”

Caitlin M. O’Shaughnessy is a freelance food writer for Chowhound, and she has published pieces for Culinary Trends magazine and Chase.com. She has edited fiction and nonfiction at Penguin Random House, where she currently works in marketing. She lives in Brooklyn.