Fresh fish is a hot commodity that’s often too expensive for food banks. A pandemic-inspired program might have shown a way forward.

Some fresh food also made its way into the emergency food system. It was a welcome counterpoint to shelf-stable goods like peanut butter and beans, at food banks and pantries that struggled to feed up to 70 percent more hungry Americans than in 2019. “We had a lot of people in the industry reaching out to us, saying, ‘We’ve got pork! How can we move this food that’s just sitting on farms?’” said Joe Weeden, who sources protein for the food bank network Feeding America.

Weeden was also approached last November by a Massachusetts-based fishermen’s association, looking to forge a partnership between Feeding America food pantries and small-boat fishermen who needed a new market for their catch. The resulting program—one of 21 funded by a nonprofit called Catch Together—was so well-received that Weeden and other organizers want to continue and maybe expand it, even as the pandemic winds down and the usual purchasers of high-quality fish re-open for business. There’s also hope among some fishermen that this may provide a way to reconnect with local communities that their business models have left behind, and to provide themselves with a layer of stability in an unpredictable sector.

In the charitable food sector, seafood is considered a nutritious “food to encourage.” But the good stuff can be hard to come by, because it’s expensive—$7 per pound or more, compared to less than $1 per pound for bulk chicken. Small-boat fishermen contend with quotas and fluctuating prices; they garner the most stable profit by sending most of their catch abroad or into food service. When Covid-19 upended these supply chains, Catch Together saw an opportunity to feed ever-more hungry local people while keeping fishermen and processors financially afloat.

“We saw a total collapse that caused fishermen to tie up because the pricing wouldn’t support a harvest. It was a really scary time.”

Catch Together normally exists to offer low-interest loans to buy fishing quotas that are then leased affordably to community-based fishermen. But in early 2020, “We saw a total collapse that caused fishermen to tie up because the pricing wouldn’t support a harvest. It was a really scary time,” said Paul Parker, Catch Together’s president. Some state and local governments had begun loosening regulations to help, like allowing fishermen to sell “over the wharf” (straight off the boat to customers). Nevertheless, many fisheries still faced abysmal market prices that didn’t justify their opening.

Parker raised $5 million in grants that Catch Together offered to community fishing organizations (or in some cases, directly to food banks). These groups then used the money to buy fish from small-boat fishermen at a fair price, and to pay processors to prepare the catch for distribution. When most of the programs wrap up this month, about 1,780 fishermen and related workers will have been positively impacted. Almost 2 million meals’ worth of restaurant-grade, freshly caught haddock, cod, shrimp, salmon, sablefish, and by-catch was also donated to front-line feeding groups. It made its way into the hands of food-insecure people in the form of fillets to cook at home, containers of fish chowder, and grab-and-go fish taco dinners.

Portland, Maine’s, fishery saw declining landing values of over 70 percent when the pandemic hit. Meanwhile, “We were hearing horror stories of people going hungry in Maine, which is already one of the most food-insecure states in the Northeast,” said Ben Martens, executive director of the Maine Coast Fishermen’s Association (MCFA), which received a $240,000 grant from Catch Together and raised an additional $400,000. Combined, the funds helped them distribute fresh and frozen filets to several area food banks; 50 schools and afterschool programs; and the Wabanaki, Angolan, and Somali Bantu communities.

Martens believes this local-fish-for-local-folks connection was overdue. “Immigrant communities are growing in Maine and that’s a space that we in the seafood industry have overlooked for a long time,” he said. “When we started talking with some of them they were like, ‘We love fish, we miss fish!’ And they don’t just want the filet—they want whole [fish].”

“Immigrant communities are growing in Maine and that’s a space that we in the seafood industry have overlooked for a long time.”

The fishermen also find relief in knowing they are guaranteed a set price for their catch. “They tell me, the best thing for my mental health is … telling me you can offer a fair price regardless of what’s happening,” Martens said. And keeping this connection to the local emergency feeding network might work—if adequate revenue streams can be tapped. One possibility: getting USDA to purchase fish through one of its buying programs, although Martens said this route is fraught; the agency is set up to buy massive quantities at low prices—much in the way it bought milk during the pandemic that was sent on to food banks, whether they wanted it or not—and isn’t quite sure (yet) how to work with small-scale, local fisheries. “Every time we have a conversation with the USDA we’re always wondering whose toes we’re stepping on and the bureaucracy is insane,” Martens said. “There might be future opportunities to change that, though.”

Jacob Shafer is development director for that branch of Meals on Wheels. He said their kitchen was slammed with demand for 1,200 hot meals a day (pre-Covid it produced 700 daily meals). “We used to be supplemental nutrition for people but now we’ve become their chief source of nutrition, which is really scary,” he said. As one of the few Meals on Wheels to cook fresh food rather than sourcing from a distributor, the program has long had a weekly fish day. The response always used to be tepid: “‘Oh, it’s fish day? Never mind,’” said Shafer. But it’s not because clients dislike fish, generally. It’s that the organization had to source low-end fish from commercial trawlers that may stay out for a week before they dock and freeze their catch. “Now we’re getting it locally sourced on the day it’s caught and people are loving it not only because it tastes and looks better but because of the story of supporting the local fishing industry.”

Inspired by the fish program, Shafer said the organization’s board of directors was compelled to spend more for higher-quality organic produce and humanely raised proteins—and to try to keep the fresh fish coming. It’ll be costly, “But Sherry [Flumerfelt]’s confident that we can get grants and private donations for some of it, then we’ll do our best to buy the rest.”

“Now we’re getting it locally sourced on the day it’s caught and people are loving it not only because it tastes and looks better but because of the story of supporting the local fishing industry.”

Flumerfelt said the pandemic has sparked creative thinking in multiple quarters about how to reforge and maintain local seafood connections. There’s a chef who wants to source whole fish to teach culinary students how to break them down, then donate the meat to food banks. And a San Francisco-based fisherman had his Facebook page translated so he could reach the city’s Chinese residents. “Eighty people would be lined up to buy fish when he’d land. And community fishermen are now more integrated in the local food system network as a result,” said Flumerfelt.

Landlocked states in the center of the country were not part of Catch Together’s fishing programs. And as a general rule, these states, and particularly some of their more rural communities, have charitable food systems that are “at the end of most supply lines,” said Carmen Shanks, principal research scientist at the Gretchen Swanson Center for Nutrition in Omaha, Nebraska. Sure, food pantries in that region would benefit from more high-quality fresh foods. Even so, she said, “It would be very difficult to get them fresh fish on a daily basis.”

But for Shanks, the value of Catch Together is broader than just fish programs. “I like the idea of shifting toward different types of foods on a plate that are local in terms of building up the food system along with healthy, sustainable diets,” she said, an initiative that $1 billion in new funding from the Emergency Food Assistance Bill will help foster. “Thinking of ways to connect to the local food system for all food groups—now that makes sense.” The pandemic could change U.S. fisheries forever. Will it be for better or for worse? 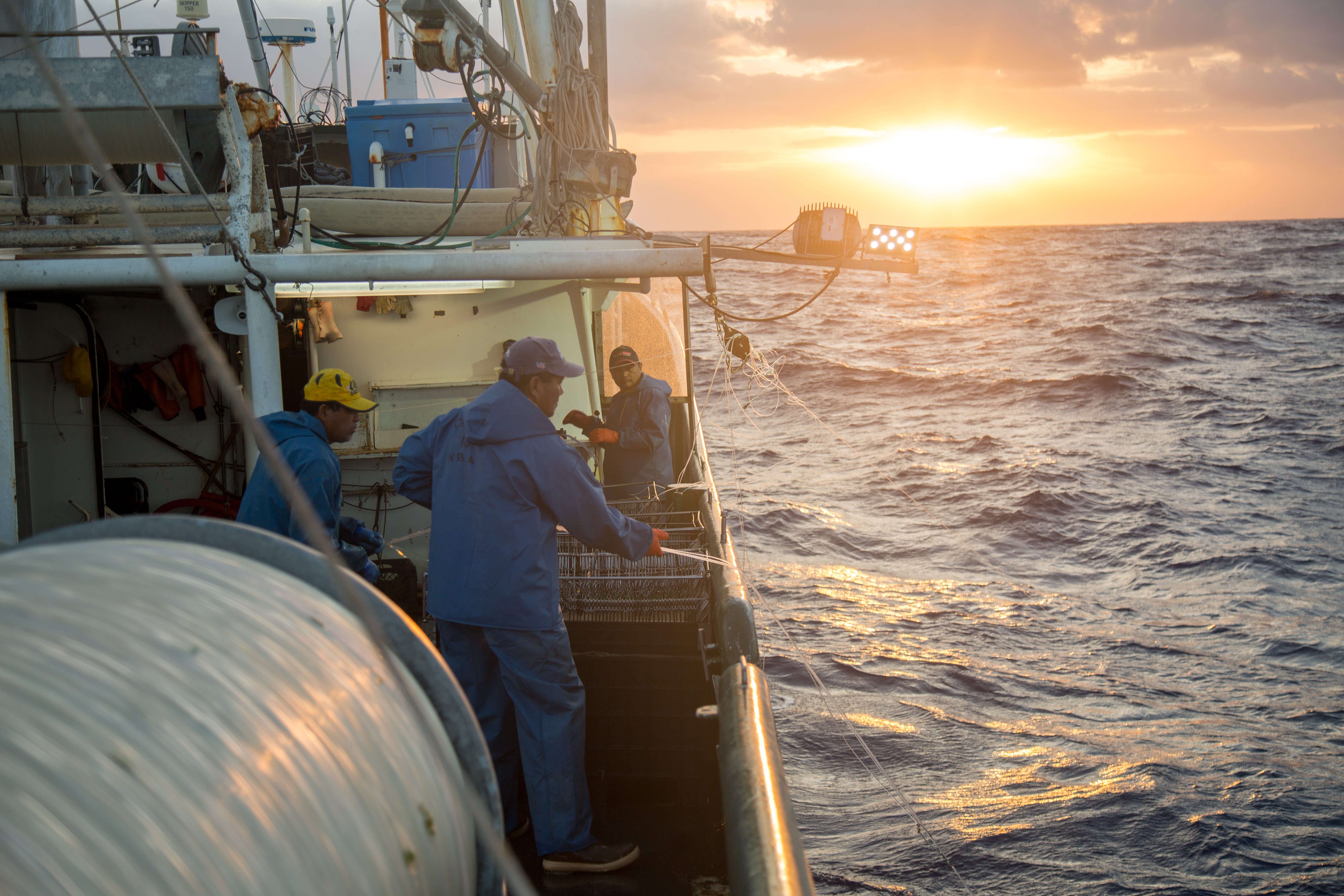