Do you care if your meat came from the United States? USDA wants your feedback. 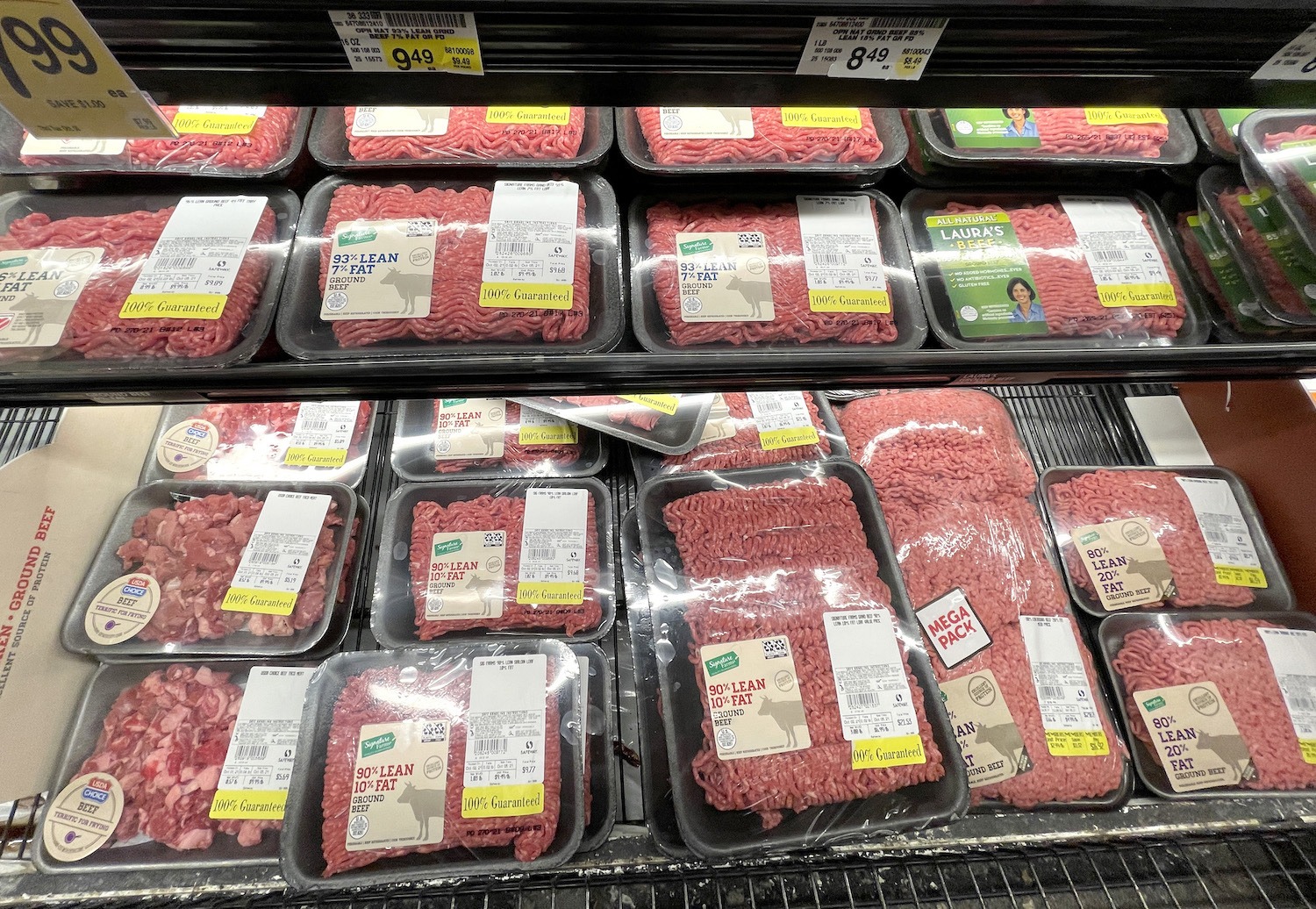 A new survey will ask whether consumers know that meat labeled as “Product of U.S.A.” could—legally—come from cattle and hogs that were raised and slaughtered anywhere.

At your local supermarket, one might presume that shrink-wrapped ground beef adorned with a red, white and blue “Produced in the USA” label would have come from cattle born and raised on American soil. But despite the label’s implications, this meat could have just as easily—and legally—come from steers that lived and died as far away as Uruguay or Australia. Under current Department of Agriculture (USDA) policy, beef and pork products can voluntarily bear a “Product of the U.S.A” or “Made in the U.S.A” marker, so long as the goods in question have been at some point processed in America—even if that means simply repackaging the meat stateside.

For years, American ranchers and their industry representatives have bellowed about domestic meat and pork packaging rules, decrying them as misleading to consumers and greatly harmful to cattle and pork producers’ business. In a possible attempt to clear up the confusion, USDA’s Food Safety and Inspection Service (FSIS), which manages label regulations, announced an upcoming survey to discern consumers’ awareness and understanding of the domestic labeling policy. The agency “intends to initiate rulemaking after conducting a comprehensive review of the current voluntary ‘Product of USA’ labeling claim,” an FSIS spokesperson said.

Through an online questionnaire, FSIS hopes to get a sense of the value consumers place on products slapped with Product of U.S.A. labels, along with general comprehension of which products are allowed to wear this label (as well as other USDA markers). The news came on the heels of President Biden affirming his commitment to curbing consolidation and boosting competition in meat processing, where four companies control 85 percent of the market.

“If there’s a label on … a pound of ground beef that says Product of the U.S.A., we want to make sure that consumers understand precisely what that means.”

“If there’s a label on … a pound of ground beef that says Product of the U.S.A., we want to make sure that consumers understand precisely what that means,” Agriculture Secretary Tom Vilsack told the House Agriculture Committee in January. “So we’re in the process of doing a fairly extensive survey to find out if consumers understand what that means and whether they place value on it.”

The FSIS outreach is the latest step in an ongoing fight over the rules governing less than a square inch of meat packaging, one that dates back at least to the partial repeal of Country of Origin Labeling (COOL) law in 2015. The legislation had mandated that processors disclose where their product was born, raised, and slaughtered. In the years since, Product of U.S.A. labels appeared to fill the void in helping consumers distinguish whether their steaks were homegrown, leading ranchers and groups like the Organization for Competitive Markets (OCM) and American Grassfed Association (AGA) to agitate for reform of the contentious regulations.

In 2018, OCM and AGA filed a petition arguing that the current FSIS rules effectively allow for imported beef to be passed off as domestic, all to the benefit of the biggest multinational meat processors. Beyond deceiving consumers who are looking to buy local meat, the groups argued, large packers cause financial harm to American cattle and hog farmers in their ability to import and sell cheap meat to retailers as American products. These positions were echoed by a bipartisan group of senators last year, who introduced the American Beef Labeling Act, which would restrict such labeling on beef to cattle that was born, raised, and slaughtered in the United States.

“If you were looking at a hamburger and it said ‘Product of the U.S.,’ I think the consumer would assume the entire production process happened in the United States.”

Carolyn Dimitri, an applied economist at New York University who has researched food labeling, sympathized with critics’ arguments that the label is misleading to consumers. She suggested that people shopping for groceries “don’t think too much” about labels; instead, they largely rely on the government to regulate these markers and ensure the information meant to enlighten consumers is sufficiently reflective of the goods they are buying.

“If you were looking at a hamburger and it said ‘Product of the U.S.,’ I think the consumer would assume the entire production process happened in the United States,” Dimitri said.

More pressing to cattle and hog farmers is the financial harm the lax policies have wrought on their business. Ranchers who spoke to The Counter were quick to point to the repeal of COOL as a major driver behind the decline of American cattle prices—a good reason to reconsider domestic labeling rules and legislation. When COOL took effect in 2009, the prices producers received for their cattle indeed went up. But Congress partially repealed the legislation for beef and pork products in December 2015, following a drawn-out battle with the World Trade Organization (WTO). The international body found the mandatory labeling requirements were discriminatory against meat imports and authorized Mexico and Canada to level $1 billion in retaliatory tariffs against the United States.

In 2015, cattle farmers’ share of retail beef prices was 51.5 percent, according to USDA, dropping to 44.3 percent the following year. The downward trend has continued even as retail prices have skyrocketed during the pandemic, with farmers earning a 36.8 percent share in 2021, seeming to track with the ranchers’ complaints. “Once [COOL] was repealed in 2016 … it’s been a downward spiral ever since,” Werner said.

But plenty of other factors beyond the repeal of COOL could have played a significant role in declining cattle prices for ranchers. Glynn Tonsor, an agricultural economist at Kansas State University, said that when COOL was repealed, there was both a tight cattle supply and strong demand for beef. “If either of those conditions changed, then we would anticipate cattle prices to decline, even if MCOOL didn’t change,” he said, using an alternative acronym for the labeling policy. In the years that followed, Tonsor suggested that the tightening of packing capacity due to slaughterhouses and processing facilities closing could have played a notable role in declining cattle prices.

Still, Dimitri, the N.Y.U. economist, pointed out that the lax regulations currently in effect for Product of U.S.A. labeling are unlikely to be helping producers amid an increasingly concentrated meat market. Given that consumers likely can’t tell much of a difference between cheap, imported meat and meat derived from animals raised and slaughtered in the United States, “it’s eroding away at the domestic producers’ market,” she said.

The FSIS survey could ultimately lead to changes clarifying what kinds of meats are allowed to bear Product of U.S.A. and other similar USDA labels. But many producers are unsure how quickly adjustments will be made that accommodate their concerns—if at all. George Wishon, a fifth-generation cattle producer in Eastern Washington state, called the survey a “time delay.” He suggested that Congress passing the American Beef Labeling Act would have a better shot at properly addressing consumer confusion and the softness of farmers’ cattle prices.

“The study’s kind of a side deal,” Wishon said. “It can help but I don’t know how much.”