An intergenerational group of Pueblo women are leading the way on water policy along the Middle Rio Grande Valley.

On a late November morning, Julia Bernal walked a stretch of riverbank along the Rio Grande in Sandoval County, New Mexico, between Santa Ana and Sandia Pueblo. Bernal pointed out the area between the cottonwood trees and the edge of the Rio Grande, a 30-foot stretch of dry earth covered in an ocean of tiny pebbles intermixed with periodic sandbars, tamarisk and willow shrubs.

This story was originally published at High Country News (hcn.org) on Oct. 25, 2021. Photography by Kalen Goodluck.

Pictured above: The Southside Water Reclamation Plant, which treats wastewater sewage from Albuquerque homes before releasing it into the river, sits on the southern edge of the city, just five miles from the boundary of the Pueblo of Isleta.

“It never used to look like this,” Bernal said. “The reason the cottonwoods look the way that they do is because of the Cochiti Dam — that hyper-channelization of the river did cause this riparian forest to just kind of (disappear) along with it.”

Bernal grew up in the 1990s watching the river shrink every year, even as Sandia Pueblo, where she is enrolled, and other Rio Grande pueblos were left out of the state’s surface-water management process. Knowing that her community’s water, central to its culture, was in danger, Bernal resolved to work in the water sector after she graduated college in 2016, perhaps in the Bureau of Indian Affairs or the U.S. Fish and Wildlife Service. But everything changed later that year.

Bernal, along with the rest of the world, watched as tribal communities came together at Standing Rock to fight the Dakota Access Pipeline. The event galvanized her, forcing her to confront the fact that it was impossible to work on behalf of the Rio and the pueblos without centering the Indigenous environmental justice perspective.  The time had come — for Standing Rock, for the pueblos, for all Indigenous communities — to enforce their sovereign right to lead on water policy.

Julia Bernal (Sandia, Taos and Yuchi-Creek Nations of Oklahoma) in Sandoval County in the Middle Rio Grande Valley. “It’s like this concept of landback. Once you get the land back, what are you going to do with it after? It’s the same thing. If we get the water back, what are we gonna do with it after? How are we going to maintain water?” Bernal, the director of the Pueblo Action Alliance, believes that “landback” can’t happen without “water back.”

“It was a fight to protect water, but also protect culture, respect treaties,” Bernal said. “It taught me a lot about how any sort of planning initiative is going to include some sort of justice component if you’re dealing with Indigenous peoples.”

Later that year, Bernal helped found the Pueblo Action Alliance, which she directs. The organization, which prioritizes youth involvement, aims to advocate for the pueblos’ water rights and explain their complex history. Bernal is determined, she said, to “ensure that not just tribal nations but communities also have participation in decision-making processes.”

Bernal is not alone — far from it. She is part of an intergenerational group of Pueblo women working, advocating and organizing on behalf of the 19 pueblo nations and their right to be policy leaders when it comes to the future of the Rio Grande. Bernal and her contemporaries fight on several fronts at once: Convincing state and local governments to recognize their legal water rights; getting those rights quantified by the courts; and navigating the reality that pueblo nations have to depend on federal officials to actually enforce the existing water-quality regulations. The state has put the pueblos in a tenuous position regarding water rights, particularly given the two-decade-long drought, and these community leaders are done waiting for the state and federal governments to act.

Indigenous water rights are intensely, often frustratingly, shaped by centuries-old colonial law. The disbursement of water within the United States is determined by a process that prioritizes what are known as senior water rights. According to Indian law and civil litigation attorney Richard Hughes, most federally recognized tribes generally have the most senior water rights across the country, secured by a 1908 Supreme Court Decision known as Winters v. United States. The legal precedent for pueblo water rights, however, can also stem from the Mechem Doctrine, from New Mexico v. Aamodt, which holds that the pueblos’ aboriginal water rights were solidified by the Treaty of Guadalupe Hidalgo, signed by the U.S. and Mexico in 1848. Despite their senior status, tribes often wait decades — some for over a century — to have their rights quantified through litigation or settlement with New Mexico and subsequent congressional approval. Whether through Winters or the Mechem Doctrine, this process is particularly cumbersome for the pueblo nations, Hughes says, which are often required to have a documented “precedent for what the tribe would be entitled to were the case to be fully litigated.”

Judge Verna Teller (Isleta Pueblo) in the Middle Rio Grande Valley at the Isleta Lakes, just south of ​​Albuquerque, New Mexico. “Every day, I thank the Creator that our standards haven’t been challenged, and they’re still active and alive today,” said Teller. “They put the onus on the tribe because we have permitting authority, so we have to monitor the river. We have to monitor that they’re maintaining as much as possible.”

Thanks to New Mexico’s attitude, the opportunity for such litigation abounds. In 2020, the pueblos of Santa Ana, Jemez and Zia withstood an attempt by the state to diminish their aboriginal water rights along the Jemez River. The case was the latest entry in a decades-long campaign of antagonism by New Mexico — the very environment that taught Judge Verna Teller how to leverage her people’s sovereignty.

Teller, chief justice of Isleta Pueblo, grew up just south of Bernal. And like Bernal, Teller witnessed disconcerting changes in the river. Like other Isleta community members, she was unnerved by the discolored foam in the Rio. After traditional elders had to stop using water in ceremonies in the mid-1980s, they asked Teller to find out what was wrong.

“I just felt obligated to help, because I knew it wasn’t just for them,” said Teller. “It was for the whole community, and for everybody in the future — our children, our babies that weren’t born yet.”

Before long, elders realized Teller needed to be in a position of authority to hold local and state agencies accountable. Teller was only 35 when traditional elders asked her to run for governor of Isleta Pueblo, and she faced an uphill battle, given the existing council’s gender-based discrimination. But once in office, she was able to work with various agencies, legal experts and hydrologists to establish a water-quality standard for Isleta. It took a decade of legal tussling with the city of Albuquerque, but under Teller’s guidance, in 1998, Isleta became the first tribal nation to establish water-quality standards under the Clean Water Act.

“It was for the whole community, and for everybody in the future — our children, our babies that weren’t born yet.”

“It was all spirit,” she said. “I still really get emotional when I think about it, because it was so important to us. As mortals, as humans, we don’t realize sometimes how powerful spirit is. They come to your aid when you need it.”

The Rio Grande flowing underneath a bridge on U.S. 550 in Bernalillo, New Mexico, in late November 2021.

Over the years, however, alleged violations by the city have rarely been punished by federal agencies. And as Teller pushes for Isleta’s government to use its regulations to hold New Mexico accountable, others, like Phoebe Suina, also work to ensure that the pueblos keep fighting for their rights to the river and for the Rio’s water quality.

Suina, who hails from the Pueblos of San Felipe and Cochiti, is a hydrologist by training and the owner of High Water Mark, an Indigenous-women-led environmental consulting company that focuses on water-resources engineering. “We really need to address the water quality along with the water quantity in this very rigid, restricted framework,” Suina said. Like Teller and Bernal, Suina is still grappling with the overarching question that has defined every facet of this struggle: Is adjudication — going to court to obtain a more permanent answer on water rights and quantification — the best way to strengthen Indigenous water rights? And if not, what long-term strategy should the Pueblo nations pursue to achieve justice, given the flexibility that climate change is going to demand?

Phoebe Suina (Pueblos of San Felipe and Cochiti) at Alameda Open Space, on the Rio Grande. “Science has said, ‘A majority of what you are made of, a majority of what I am made of, is water.’ So what we’re talking about in terms of water rights, it is you, it is me.”

The Rio Grande as seen from Albuquerque, New Mexico, in the Middle Rio Grande region. Quantifying water rights through litigation or settlement is a lengthy process, one that could easily outlast our lifetime, according to Richard Hughes, an Indian law and civil litigation attorney. What it could mean, if adjudicated, is that the rights of the Middle Rio Grande pueblos would finally be defined — inarguably — as superior to non-Native entities and governments. “It would completely turn the whole water-rights situation in the basin on its head,” Hughes said.

“Even today, without the whole complexity of the prior paramount water users and water-right holders — even without all that, just with (the 1938 Rio Grande Compact) — (New Mexico) cannot live up to that agreement because of the drought,” Suina said, citing the ongoing litigation between Texas and New Mexico over water. “How do you have an agreement that you cannot live up to?”

“How do you have an agreement that you cannot live up to?”

For now, the question facing all sides involved in this complex, constantly shifting situation is painfully simple. Teller put it best: “Do we want the courts to settle it? Or do we want to settle it by working together?”

Kalen Goodluck is a reporter and photographer based in Albuquerque, New Mexico. He comes from the Diné, Mandan, Hidatsa and Tsimshian tribes. 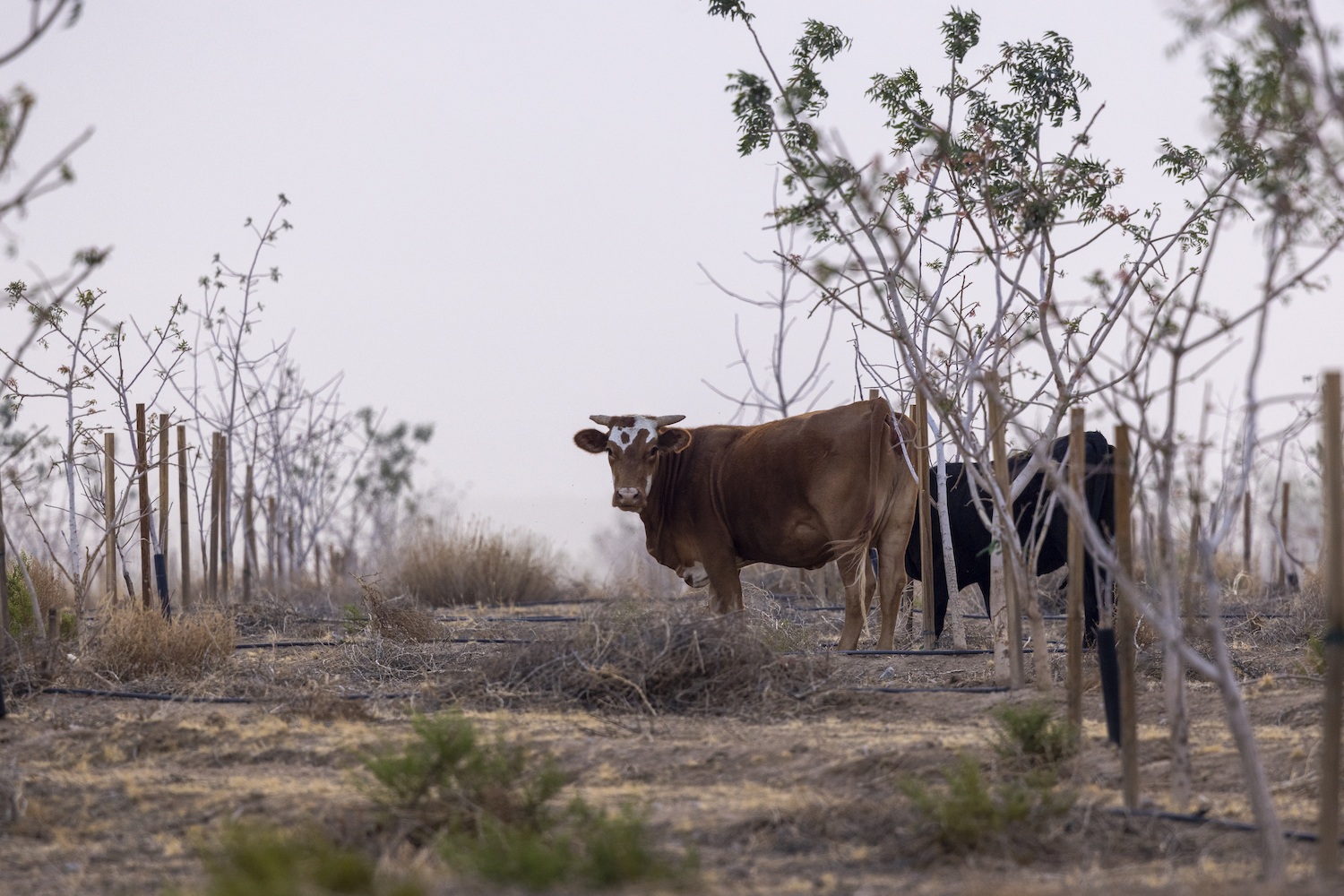