After 25 years behind bars, the man who co-organized a prison lunch in George Floyd’s honor finds a whole new world of beautiful produce, family dinners, and grocery-store bounty.

Michael Thompson once ate 11 tomatoes in a day, a treat from another incarcerated man’s vegetable garden. His mother worried that excessive tomato intake would trigger gout.

“My mother told me, ‘Slow down. Don’t do that,’” Thompson told The Counter via phone from the Muskegon Correctional Facility in Michigan earlier this winter.

For 25 years—how long Thompson, a native of Flint, Michigan, served in prison—fresh tomatoes and family time were rare. For much of his time behind bars, Thompson refused in-person visits; he had too much pride to allow his loved ones to see him in the blazing orange jumpsuit. Michael Thompson and his family reunited for his first meal outside in a quarter of a century.

Thompson, 69, had been sentenced to 40 to 60 years behind bars in 1995. He’d sold marijuana to a car muffler-shop owner who was also a police informant. Today, Michigan law allows adults to grow, use, transport, and transfer cannabis in certain circumstances and quantities. That wasn’t the case at the time of Thompson’s trial. A habitual felon law meant that a prosecutor combined prior offenses and charges for weapons found at Thompson’s home, even properly stored weapons that weren’t his. Thompson got a virtual life sentence, a harsh outcome that triggered calls for his release, from figures such as Michigan Attorney General Dana Nessel to celebrity Kim Kardashian.

RelatedFlimsy plastic knives, a single microwave, and empty popcorn bags: How 50 inmates inside a Michigan prison prepared a feast to celebrate the life of George Floyd

Meanwhile, Thompson found purpose on the inside, counseling younger men and, in the summer of 2020, co-organizing a lunch to honor the life of George Floyd, killed by Minneapolis police in May. Fifty incarcerated men dug into a meal they’d never get from the mess hall: bagels, fried rice (cooked in empty popcorn bags), chili, seasonings not used in prison, chips, and soda. Some of the men had not had a pop in decades. Upon his release, Thompson wanted a salad of tomatoes and cucumbers, garnished with salt, pepper, and vinegar.

On January 28, Thompson began a new chapter of his life, when he was released from prison in the dark, cold hours of the morning. Greeted by his daughters, granddaughter, lawyer, and friends, he said simply: “I feel good. Twenty-five years is a long time.” His mother wouldn’t be there to greet him or warn him not to binge on tomatoes. She had had a deathbed wish that Thompson wouldn’t die incarcerated; he attended her 2017 funeral in shackles.

Later on his release day, Thompson would have another special meal—his first on the outside in a quarter of a century. He wanted a salad of tomatoes and cucumbers, garnished with salt, pepper, and vinegar. The simple salad would be accompanied by fried fish.

“I love seafood and vegetables,” Thompson told The Counter from the prison before his release. Those final months in prison hadn’t been easy. Thompson, who’s also a diabetic, had had a serious bout of Covid. “I was so sick. I didn’t want nothing to eat. Food: I didn’t want to smell it. That’s how I lost 35 pounds. I didn’t care about food. Food and water were nasty,” probably a condition called parosmia, in which the senses are distorted.

Even before his illness and the pandemic began raging through prisons and jails nationwide, Thompson wasn’t a fan of prison fare. “I know some dogs won’t eat this food. They’d knock the bowl over if you try to feed them this. Horrible.”

On his release day, Thompson would have another special meal—his first on the outside in a quarter of a century. He wanted a salad of tomatoes and cucumbers, garnished with salt, pepper, and vinegar. The simple salad would be accompanied by fried fish.

As the Detroit Metro Times has reported, after the Michigan Department of Corrections outsourced prison food to private companies, inmates would sometimes find maggots and mold in their meals. Fruit was often unripe or rotten, serving sizes were too small to keep hunger at bay, some seasonings weren’t allowed, and “mystery meat” was common. Incarcerated people also appear to be higher risk for food poisoning than their nonincarcerated counterparts.

In some ways, Thompson is luckier than most. Deedee Kirkwood, a 72-year-old activist living in the scenic seaside town of  Camarillo, California, put money in his commissary account. The cash allowed him to quell his craving for good fish with canned tuna—an otherwise unaffordable luxury.

“She’s an angel. That was her main thing, eating right,” he said. If he hadn’t been able to eat a healthier diet than the prison food, Thompson thinks he might not have lived long enough to walk out of prison. The first course prepared by Michigan Cannabis Chefs was a tomato and pickle tray.

Kirkwood began trying to help people incarcerated on drug charges when she realized there were people in prison for marijuana, a drug she’d used when she was younger. As a white hippie who had followed the Grateful Dead, she hadn’t suffered any consequences for using the same drug that landed Thompson in prison for more than two decades.

She started planning Thompson’s first dinner with his family and friends when word came he was going home. The Covid-19 pandemic put roadblocks in their dinner plans. Thompson initially planned to go to a restaurant for his first meal on the outside, preferably a place where the owner was an old friend. But Michigan was then banning indoor dining and it’s too cold for outdoor dining.

With money raised by activists, Thompson’s supporters scheduled a lunch for his first day out: that tomato-and-cucumber salad he’d been yearning for, catfish, chicken, mac-and-cheese, turnip and collard greens from Claudia Perkins-Milton, once a union representative at a Flint automotive plant where Thompson had worked. That factory has since shuttered, but she continued to advocate for Thompson.

The day after Thompson’s first dinner, he awaited a brunch provided by Cory Roberts, co-owner of Michigan Cannabis Chefs, a catering company that makes dishes from the cannabis it grows alongside potatoes, corn, and onions (Thompson’s meal didn’t contain cannabis).

Co-owners and chefs Lynette Roberts and Nigel Douglas prepared a menu based on Michael’s favorite foods. If “he wants fish,” said Douglas, “let’s get it.” “Son of a bitch,” Thompson said after his first bite of crumble. Thompson reflected on sharing meals with the people he loves, saying he’s not bitter about the 25 years and the thousands of meals he missed with them.

The next round was more casual, kind of like the day after Thanksgiving, when there’s already so much food and everyone’s too tired for fancy meal prep. The family dove into leftovers. “They had so much fun in the kitchen, and they came up with another great meal. So this is Michael’s third ‘first meal’ and loving every bite. The sweet taste of freedom is extraordinary,” said Kirkwood.

Thompson reflected on sharing meals with the people he loves, saying he’s not bitter about the 25 years and the thousands of meals he missed with them.

“I like to see people eat good food. Sit down with friends and family, and break bread at the dinner table,” he told The Counter. “To see people eat something I created, whether I made or paid for it.” Those feelings are helping him damp down anxiety and “fear of the unknown. … But so much love keeps coming.”

The grocery store was a burst of Technicolor compared to the dullness of prison life and barely edible food. “I was shocked at all the fruit, the beautiful fruit,” Thompson gushed. “Peaches, plums, cherries, bananas.”

With the help of the Last Prisoner Project (a cannabis and drug policy reform organization) and activist Shaun King, Thompson’s online fundraiser has collected more than a quarter of a million dollars, allowing him to purchase a condo he’ll soon occupy. Daughter Rashawnda Littles invited him to live with her. But he doesn’t want to be a burden and values his independence (“Can’t get rid of this one,” he joked lovingly, noting after being without her dad for 25 years, she’s at his temporary Airbnb all the time).

He plans to devote his life to criminal justice reform and is already working with the Last Prisoner Project. He’s not going to forget the guys he left behind because they were his community—still are—and “I consider myself an honorable man.” On his first trip to the grocery store after a quarter-century in prison, Thompson marveled at fruit—even in the middle of Michigan winter—and large cans of tuna.

But there are now more everyday matters to handle. A few days after his release, Kirkwood and Thompson went to the grocery store for the first time. Thompson filled up his shopping cart. “I was like a kid in a candy store!” he told The Counter. “I got all the tomatoes!”

The grocery store was a burst of Technicolor compared to the dullness of prison life and its barely edible food. “I was shocked at all the fruit, the beautiful fruit,” Thompson gushed. “Peaches, plums, cherries, bananas. The variety of seafood. Crabs, fish, oysters. Different flavors of water and pops. I can go on and on. It is beautiful.” He was happily surprised by how big the cans of tuna were, noting that those sold in the prison commissary were a ripoff by comparison.

Today, he has tomatoes with every meal—including with his morning eggs. And he’s cooking. He taught a favorite recipe to his grandson: smothered chicken with gravy (and a side of tomatoes). Thompson, who’d learned the recipe from a friend before he went to prison, directed his grandson’s every step to ensure the younger man got it right for his girlfriend.

“First, you fry the chicken,” Thompson said. The spices are simple: salt, pepper, flour. “Then, you smother it in chicken gumbo—where you can’t even see the fried chicken—and put it in a pan, then you bake it.”

His grandson pulled the recipe off masterfully. Thompson noted, with pride, that Kirkwood, who usually eats like a bird, had seconds. My auntie’s jollof rice, and other things Covid-19 stole from me Ahmed Errachidi, a detained chef at Guantánamo, brought love for food to other prisoners 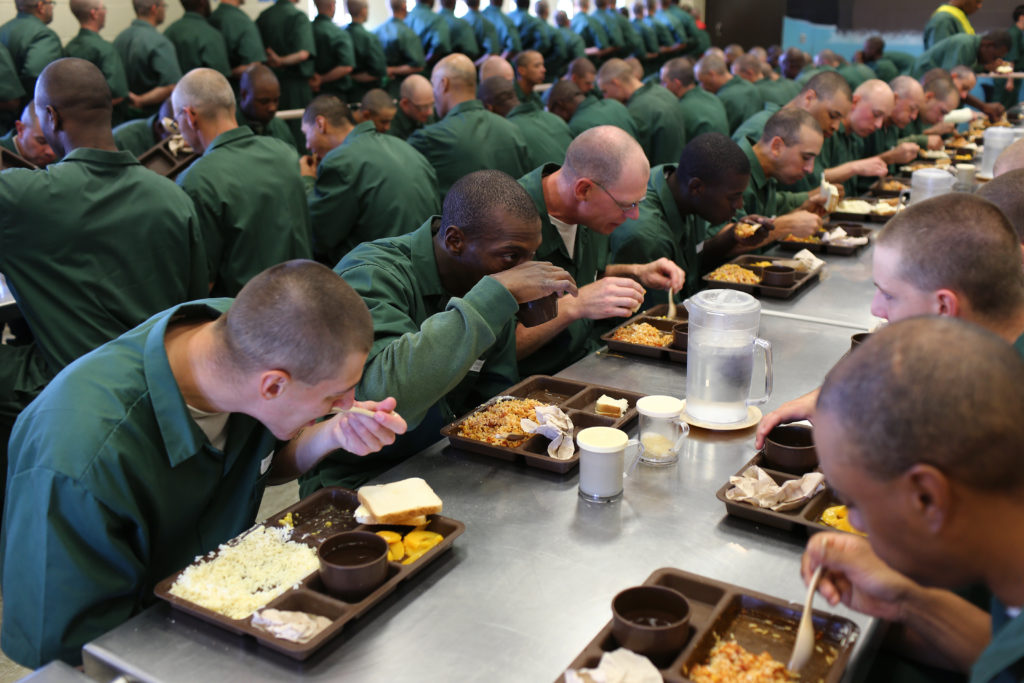