AB 257 would establish an independent council to discuss and set industry-wide minimum standards, a move labor advocates have wanted for years.

A union-backed fast-food regulation bill, which would guarantee the state’s more than half-a-million foodservice workers the ability to negotiate with franchise owners and corporate giants for better wages and workplace standards, squeezed through the California State Assembly on Monday.

Legislators voted 41 to 21 in favor of Assembly Bill 257, also known as the Fast Food Accountability and Standards Recovery Act (FAST Recovery Act), which will now move to the state senate. This was the second time the Assembly voted on the bill, having fallen short by three votes this past June.

The FAST Recovery Act would establish the Fast Food Sector Council, comprising 11 individuals chosen by the governor and state legislators. The council would meet every three years to negotiate and recommend industry-wide minimum standards concerning pay and working conditions like safety and training. The legislature would then be able to amend or repeal the recommendations before their adoption. The appointed body would include five representatives for state agencies that handle labor, health, and workplace safety; two workers and two employee advocates; and one representative each for franchisees and corporations.

The legislation, which would apply to any fast-food chain with 30 or more locations nationally, would also hold fast-food brands and local franchise operators jointly liable for any violation of the council’s recommended standards or existing labor laws. (Workers at franchise locations are technically employed by the franchisee, not the fast-food company like McDonald’s, which under current federal labor law heavily shields the company from responsibility for workplace violations at stores.)

“California has a chance to lead the country and address long standing issues in the fast food industry by creating a statewide fast food sector council.”

Democratic Assemblymember Chris Holden, one of four assemblymembers who reintroduced AB 257 with amendments in late January, said Monday on the Assembly floor that the bill would help uplift workers and small business owners throughout the fast-food sector.

“California has a chance to lead the country and address long-standing issues in the fast-food industry by creating a statewide fast-food sector council,” said Holden, a former Subway franchise owner, adding that the the bill “is about fairness, and it is about bringing all the responsible parties to the table to collaborate on solutions.”

Since its initial introduction in January 2021, AB 257 received an outpouring of support from the labor movement, with the Service Employees International Union (SEIU) and the affiliated Fight for $15 campaign agitating for its passage. Over the past year, workers at McDonald’s and Jack in the Box locations across the state have walked off the job to hold rallies, demanding that their legislators vote in favor of AB 257 while carrying signs reading “Which side are you on?”

Imelda Rosales, a McDonald’s worker in the Los Angeles area and a member of the Fight for $15 campaign, told The Counter (in Spanish through a campaign translator) that the bill could help pave the way for a much-needed overhaul in the fast-food industry, particularly when it comes to pay and worker safety.

“It’s gonna be a lot easier to have a voice at the table and make changes, that way they’re not going to have to continue with the same strategy of having to do strikes,” Rosales said of her colleagues. She later added that when it comes to the bill holding fast-food brands accountable for issues like wage theft or sexual assault, “the corporations should’ve been responsible for what’s happening in the franchises to begin with.”

According to a 2021 report by the University of California, fast-food workers across the state—an estimated 557,000, the vast majority of whom are people of color and women—earn a median annual wage of just under $26,000, and two-thirds say their families rely on social safety net programs. On top of low wages, sexual harassment and regular violent encounters on the job have plagued fast-food workers, as has working in extreme heat. The Covid-19 pandemic has further exacerbated the fraught nature of fast-food workplaces, with a survey by the UCLA Labor Center of Los Angeles-area workers finding that nearly a quarter contracted the virus since mid-2020; fewer than half said they were given paid sick leave if they or a co-worker contracted the virus. During the global health crisis, almost two-thirds of workers said they experienced wage theft.

Although the fast-food sectoral council would be a first of its kind in both size and scope, there have been similar recent efforts across the United States. In 2015, New York State convened a wage board to determine whether to raise the minimum wage for fast-food workers to $15, which then voted to raise workers’ pay. In 2018, Seattle established a broader labor standards board for domestic workers, which would make suggestions to the city council and other legislators for improving laborers’ pay and working conditions. Detroit did the same in late 2021, with legislation covering multiple industries.

Business groups strongly pushed back against AB 257, claiming that the legislation would severely harm franchise operators. Mark Turner, president and CEO of the Gilroy Chamber of Commerce, said in an email that new standards set by the council could create increased costs for franchisees without any increase in sales, potentially leading to a “reduction in staff, cutting hours back, and/or an investment by the franchisee in technology that replaces [workers] altogether.”

AB 257 could ultimately relieve the competitive pressure that ultimately leads to a race to the bottom on pay and other conditions.

Jeff Hanscom, vice president of state and local government relations for the International Franchise Association, told The Counter in December that beyond ceding the development and enforcement of industry regulations to unelected officials, AB 257 would discourage entrepreneurs from buying into franchises by reducing their independence from fast-food corporations.

“Franchising provides unparalleled opportunities for entrepreneurs in California, and better wages, hours, benefits for their workers, and this misguided proposal threatens thousands of California entrepreneurs and workers,” Hanscom said in a statement after the bill’s passage on Monday.

But Brian Callaci, chief economist at the Open Markets Institute who researches franchises, pushed back against this framing. He noted that with the modern franchising model, franchisees already are extremely limited in their ability to deviate from the strict provisions written into their franchising agreements. In addition to paying royalties and marketing fees to brands like McDonald’s and Taco Bell, franchisees are contractually obligated to abide by a host of specific requirements, including menu pricing, authorized ingredient suppliers, and many other operational considerations. Beyond minimizing franchisees’ ability to make decisions independently from corporations, these requirements often leave labor costs as the only means by which to eke out a profit, ultimately putting a downward pressure on workers’ pay and disincentivizing the franchisees from providing better benefits, potentially pushing them toward breaking employment laws.

By having workers negotiate together with franchisees and franchisors on minimum standards that would apply to franchisees across the industry, Callaci said, AB 257 could ultimately relieve the competitive pressure that ultimately leads to a race to the bottom on pay and other conditions. For instance, franchisees would be able to tell fast-food brands that to pay a higher minimum wage while maintaining market competitiveness, they may have to loosen up on requirements like mandatory pricing for suppliers. Furthermore, AB 257 not only holds franchisees responsible alongside franchisors for violating the council’s standards or existing labor laws, it also enables them to sue fast-food corporations if a franchise agreement’s policies essentially coerce them into breaking these regulations. “The whole reason that [fast-food companies] do franchising, the motivation for developing the business structure, is to get that control that they like and avoid the responsibility,” Callaci said. “Making the franchisors own it helps them behave more responsibly.”

Should the bill ultimately become law, David Madland, senior fellow at the Center for American Progress, said it’s possible that other states would establish their own sectoral councils to tackle the issue of working conditions across the fast-food industry.

“It would be the first of its kind for fast-food workers that really transforms an industry with the kinds of challenges that many other states and the whole country are trying to figure out how to deal with,” Madland said. “That really could spur others to act. That would be, I think, one of the most important things that could come out of this.” 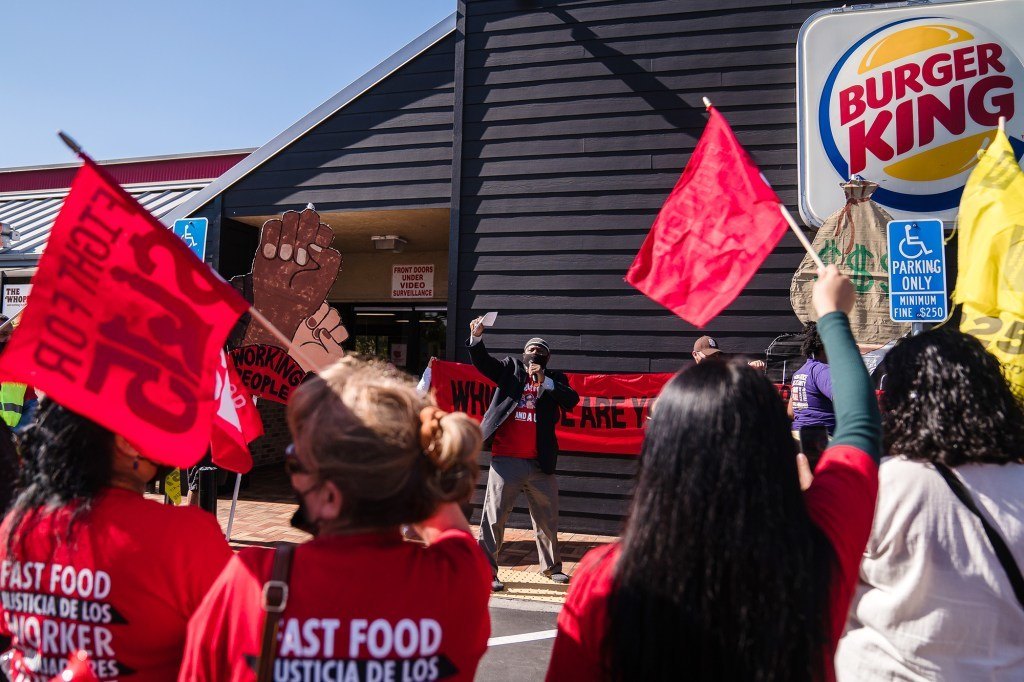