“When a grocery store closes up and it’s your last one, you feel it immediately.” Rural areas are losing grocery stores but gaining other kinds of food retailers, such as dollar stores, according to the USDA.

Pictured above: Market on the Hill in Mt. Pulaski, Illinois.

Born and raised in Mount Pulaski, a town in central Illinois, Tom Martin has seen several grocery stores shut their doors over the years. The last one closed in 2016.

It was hard to buy basic staples, such as milk or bread, after the independent grocery store’s closure, said Martin, 65, a local farmer. Residents in the 1,500-person town had to rely on the nearby dollar store and gas station to purchase food.

“When a grocery store closes up and it’s your last one,” Martin said, “you feel it immediately.”

Rural towns, such as Mount Pulaski, have lost grocery stores while dollar-store chains have been on the rise, according to the U.S. Department of Agriculture. The departure of food stores leaves residents, especially those in areas with high poverty rates and dwindling population, with fewer options to buy food.

The loss of the only grocery store in town, Martin said, led the community to set up its own market. In June 2020, Market on the Hill opened its doors for the first time, offering neighbors fresh produce, meat and deli items. Many of the goods in stock are locally sourced.

“We’re continually trying to find out how to stock our shelves and what sells, what doesn’t sell,” Martin said. “We all came into this without much grocery experience.”

A USDA report published last year found that, across the U.S. in 2015, there were 23 counties – all rural – without food retailers.

A USDA report published last year found that, across the U.S. in 2015, there were 23 counties – all rural – without food retailers. None were in Illinois. As the number of grocery stores declined from 1990 to 2015, dollar stores and supercenters steadily grew.

With the closure of grocery stores, rural populations are forced to drive longer distances to purchase food. This may be a larger issue for low-income residents who are not able to afford transportation to get groceries. In 2015, according to a USDA report, about 5 million people who lived in rural areas had to drive 10 miles or more to reach the nearest food store. The interior of Market on the Hill in Mt. Pulaski, Illinois.

Martin was partly motivated to help build a community-owned market because elderly neighbors had to travel long distances to get groceries.

“For them to try and drive 15 miles or 20 miles to a grocery store when they need a gallon of milk and maybe some bananas, it just made no sense at all to me,” Martin said.

Martin said that the response to the community-owned market has been positive, but running a grocery store is not always profitable. Market on the Hill operates as a co-op, funded and operated by Mount Pulaski and southern Logan County neighbors.

“Because there’s such a thin margin in the grocery business, if you’re not doing the volume, it’s really hard to make a profit,” Martin said.

Sean Park, program manager for the Illinois Institute for Rural Affairs, helps communities organize their own markets, like Market on the Hill. Park knows firsthand the challenges of operating a grocery store because he owned one in Rushville for a decade. Locally produced milk for sale at Market on the Hill in Mt. Pulaski, Illinois.

For Park, the exodus of grocery stores contributes to the overall decline in population in rural communities. In Illinois, all but three rural counties lost population over the last decade.

“What we see is the death of those communities without the grocery store anchor institution,” Park said. “You’re not going to move to a community that doesn’t have access to fresh food.”

The rise of dollar stores

In rural areas across the country, according to the USDA, 11.6% of households struggled to access food in 2020. Dollar stores offering cheap food and other products have entered small towns in recent years as communities lose grocery stores. For instance, Dollar General — which has a location in Mount Pulaski — now has 18,000 stores nationwide.

After years of backlash, dollar-store chains, which mostly sell packaged and frozen goods, have begun to offer fresh foods in some stores, CNN reported last year. But some advocates for healthy food options remain skeptical.

“Their focus is not on fresh food,” said Jennifer Paulson, executive director of Food Works, a southern Illinois nonprofit. “They may carry some fresh foods, but they are usually not in the best shape. I think about things like trying to get someone to eat more fruits and vegetables. They need to have fruits and vegetables that are fresh and taste good.”

“Their focus is not on fresh food.”

Paulson noted that many households in rural areas face food insecurity, and shopping at dollar stores may be the only way they can access goods.

“(Dollar stores) don’t have fresh food because it requires people and requires labor, and on top of that, has some training,” Park said. “It’s just really difficult to work with.”

In a statement, Dollar General said about 2,000 stores nationwide offer fresh produce, and it plans to add the option to about a thousand this fiscal year.

“In many instances, Dollar General is sought out by communities to open stores in their towns after their local grocery store closes,” the statement reads. “We are grateful for the opportunity to help fill this gap and serve customers that would otherwise not have access to an affordable retail option.” (Read the full statement here.)

“You can drive through and see miles and miles of farms, but very few of those farms are actually growing food that people can eat,” she said.

She said farmers’ markets offer a way to overcome the problem of food accessibility in rural communities. Food Works runs the Community Farmers Market during the winter in Carbondale, located in southern Illinois. General manager Bonnie Davis and board member and farmer Tom Martin at Market on the Hill in Mt. Pulaski, Illinois.

Though markets are a start, she said, it’s going to take more to ensure access to food in rural areas.

“They don’t work for everyone, whether that be because maybe someone’s not familiar with shopping in that way or maybe it doesn’t work for people because (the market is open) on a certain day,” Paulson said. “Many, many people in rural areas are still traveling really kind of significant distances to get to grocery stores.”

For Martin, the farmer, opening up a market to feed his community wasn’t an easy task, but it was certainly worth it.

“It takes a lot of diligence to continue to offer your community and your customers what they want and bring them in through the door,” he said. “But I think in the long run the people in the community appreciate it, and it’s been a huge asset to the town.” 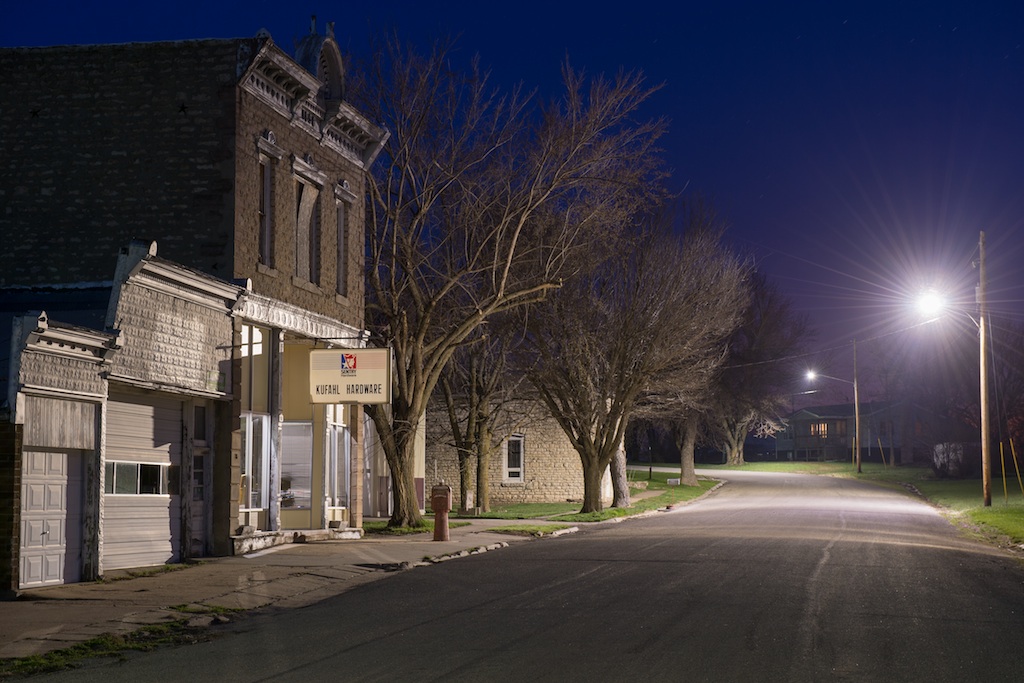