Since Michelob is capping proceeds at $1 million, and only a few thousand acres will be impacted, farmers may benefit more from the company’s high-profile ad campaign.

The commercial opened on a lone, bearded farmer standing in a dark field. A narrator intoned meaningfully that less than 1 percent of American farmland is organic. But, the female voice continued, we could change that simply by buying Michelob Ultra Pure Gold, the first national, certified-organic beer brand. There was the pop and hiss of a twist-off bottle top, and suddenly we were in the club, only the club was a subway station and a woman carried a six-pack with her onto the train.

The bargain proposed in this splashy ad—which aired during the 2020 Super Bowl and juxtaposed scenes of hip urbanites, horseback riders, dancers, and surfers against idyllic panoramas of green and gold cropland—is that Michelob will deliver six square feet of organic farmland for every six-pack purchased. To be more specific, for every six-pack of Pure Gold sold, the company has committed to spending 2 cents, the annual cost of helping transition six square feet of farmland to organic through its Contract for Change program, to help conventional barley farmers transition to organic.

“The idea behind the campaign was that it takes roughly 6 square feet of organic barley to brew one 6-pack of Michelob ULTRA Pure Gold,” a spokesperson wrote in an email to The Counter. “With each 6-pack sold, we’re helping transition the amount of land needed to produce the barley used to brew it.”

The brewer said the funds will be distributed as “transitional barley premiums,” meaning Michelob will commit to buying grain from farmers in the process of transitioning to organic at a higher price point than conventional barley, even before the grain is certified organic. (Paying slightly more for transitional products is increasingly common these days.)

According to the fine print, Michelob’s contributions are capped at $1 million. So how big will the initiative’s impact really be? Let’s do the math. We, the public, will need to buy 50 million six-packs of Pure Gold for Michelob to give $1,000,000 to Contract for Change. Given that the purchase of each six-pack is intended to help convert six square feet to organic, that means Michelob will help convert up to 300 million square feet of farmland. That sounds like a lot.

But consider that figure in the context of the almost 900 million acres of farmland in the United States. There are 43,560 square feet in an acre, so 300 million square feet is really only about 6,887 acres, or less than .003 percent of the total U.S. barley acreage.

Something else to note is that it takes three years to transition to organic. If 2 cents is the per-year cost of that transition, that acreage should really be divided by three—so the funds raised by Michelob’s Contract for Change will convert less than 2,300 acres of barley to organic across three years. That’s less than .001 percent of America’s total barley acreage.

Michelob, a brand owned by the massive multinational company AB InBev, is also working with the California Certified Organic Farmers (CCOF) Foundation to give an additional $500,000 to other growers—not just barley farmers—who want to go organic, in the form of $5,000 grants.

That’s 100 grants, which doesn’t seem so shabby. But evidence suggests that AB InBev spent much more on marketing than it will raise for farmers. Consider this: Since the average cost of a 30-second Super Bowl ad in 2020 was $5.6 million, it is not unreasonable to estimate that the 60-second Pure Gold commercial cost $10 million or more to run during the big game. (Michelob’s spokesperson declined to comment on its media spend.) As one skeptical Reddit user observed, “Michelob Spent $10 Million on a Super Bowl Ad To Tell Us They’ll Donate $1 Million To Farmers If We Spend $450 Million Buying Their Beer.“

“This is likely about Michelob wanting to increase supply of organic grains so it can source cheaper ingredients for its beer,” Amanda Zaluckyj, an attorney and blogger, opined for AgDaily. “Anheuser-Busch is only looking out for Anheuser-Busch.”

But a case of faux-lanthropy is not the whole story here. Whether Michelob is responding to or driving consumer demand for organic products—or both—the Super Bowl commercial put organic agriculture at the center of the conversation. While the ad reignited a mostly one-sided Twitter debate about the value of organic, others were grateful for the attention. In conversations with The Counter, growers, agriculturalists, and craft brewers celebrated the campaign for its potential to educate the public.

“I thought it was incredibly exciting, the commitment to organic and the thoughtfulness in terms of the challenges that new organic farmers face,” said Erin Silva, who leads the University of Wisconsin Organic and Sustainable Agriculture Research and Extension program. “Just to have a well-known company like Anheuser-Busch be able to so publicly, in a Super Bowl ad, state that commitment and bring consumers on as partners in that process was just really, really encouraging.”

Barry Labendz, owner of a farm brewery in Connecticut called Kent Falls Brewing Co., said the campaign is similar to a concept the Northeast Grainshed created to generate enthusiasm for beers and breads made with locally grown grain (although its focus is on “local,” not “certified organic”). The Northeast Grainshed created a tool for use by brewers in calculating the square feet of barley required to produce a pint, so they can pass that information on to their customers.

As Labendz explained to The Counter, if consumers don’t buy beer made with local malt, his brewery can’t support local farms. “If we make a beer and it sits on a shelf and nobody buys it, it doesn’t do anybody any good,” he said.

Labendz wants people to make the connection between the beer, the malt, the barley, and the land, and said the Michelob commercial might make that easier. “I was just glad that this idea was incepted to millions and millions of people and it’s easier to now communicate our idea,” he said. “I tell somebody, when you buy my can of beer, you keep four square feet in local agriculture.”

Why does Kent Falls use four times as much grain as Michelob to brew a single beer? Because not all beers are created equal. Each beer has its own signature proportion of malt, the treated grain (most often barley) used in the brewing process. The color, the flavor, the foam, all comes from the malt, said Paul Schwarz, a professor of plant science at the Institute of Barley and Malt Sciences at North Dakota State University. And you just don’t need that much of it to make a light, 85-calorie lager like Michelob Ultra Pure Gold.

Brewing an ultra-light organic beer, one that’s even lower in calories than the non-organic Michelob Ultra, allows AB InBev to produce a large number of certified organic six-packs using a comparatively low amount of organic grain. If transforming America’s farmland was a top priority for Michelob, as its commercial suggested, the company could really ramp up demand for organic barley by brewing beer that needs two or three times as much organic grain.

But perhaps that oversimplifies the reality of supply chains.

“It takes years to develop a market and then to get the supply for that market,” said Andrea Stanley, who co-owns a craft malthouse in Massachusetts called Valley Malt. Most of the grain Valley Malt sources is conventional, but Stanley said that just because farmers aren’t certified organic doesn’t mean they are always chemically spraying their fields. “There’s such a spectrum,” she said.

According to USDA, there were 51,254 acres of organic barley harvested nationwide in 2016. Although the commercial didn’t specify that the initiative was focused on a particular region of the country, Michelob is homing in on Idaho, where its spokesperson said the company plans to increase the number of organic barley growers contracted by Michelob from six to 30.

Not all of the impediments to going organic are structural or financial.

In 2016, Idaho grew 14,544 acres of organic barley. As the spokesperson pointed out, increasing that total by 6,887 acres would increase the organic barley acreage in the state by more than 45 percent. But you could frame the same statistic another way: Michelob’s program will transition only 1.25 percent of Idaho’s 550,000 acres of barley to organic.

Even if Michelob can make a difference in Idaho, what about the rest of the country? The reality is, not all of the impediments to going organic are structural or financial.

“It would be nice to see more farmland transition to organic,” said Schwarz, who works with growers as well as the industry. “At least in North Dakota … [barley] is prone to a disease called scab or Fusarium head blight. That disease produces a mycotoxin on the grain and in our area virtually everyone has to apply fungicide to meet quality specs.”

Right now, Idaho is largely free of Fusarium head blight. The fungus thrives in wet environments, and it is thought that dry southwesterly winds coming off the High Plains desert help prevent infection in the southeastern part of the state. That explains why Idaho is one of the top states in organic barley production, and why Michelob is building up its organic supply chain there. That said, the regional climate is changing, and warmer, wetter conditions are predicted in the near future, which could make Idaho barley more susceptible to the disease.

All things considered, Michelob’s ad campaign could be more valuable in the culture wars than in actually changing … what was it the commercial’s narrator said? Right: “If every football fan picks up a six-pack, we could change America’s organic farmland forever.” What does that even mean?

It’s a Super Bowl ad. We expect the claims to be hyperbolic, to appeal more to our emotions than our intellects. Still, you almost have to admire the sleight-of-hand Michelob pulls off here: The company manages to sounds like it’s pledging to change America’s farmland forever, while also managing not to say anything of the kind. 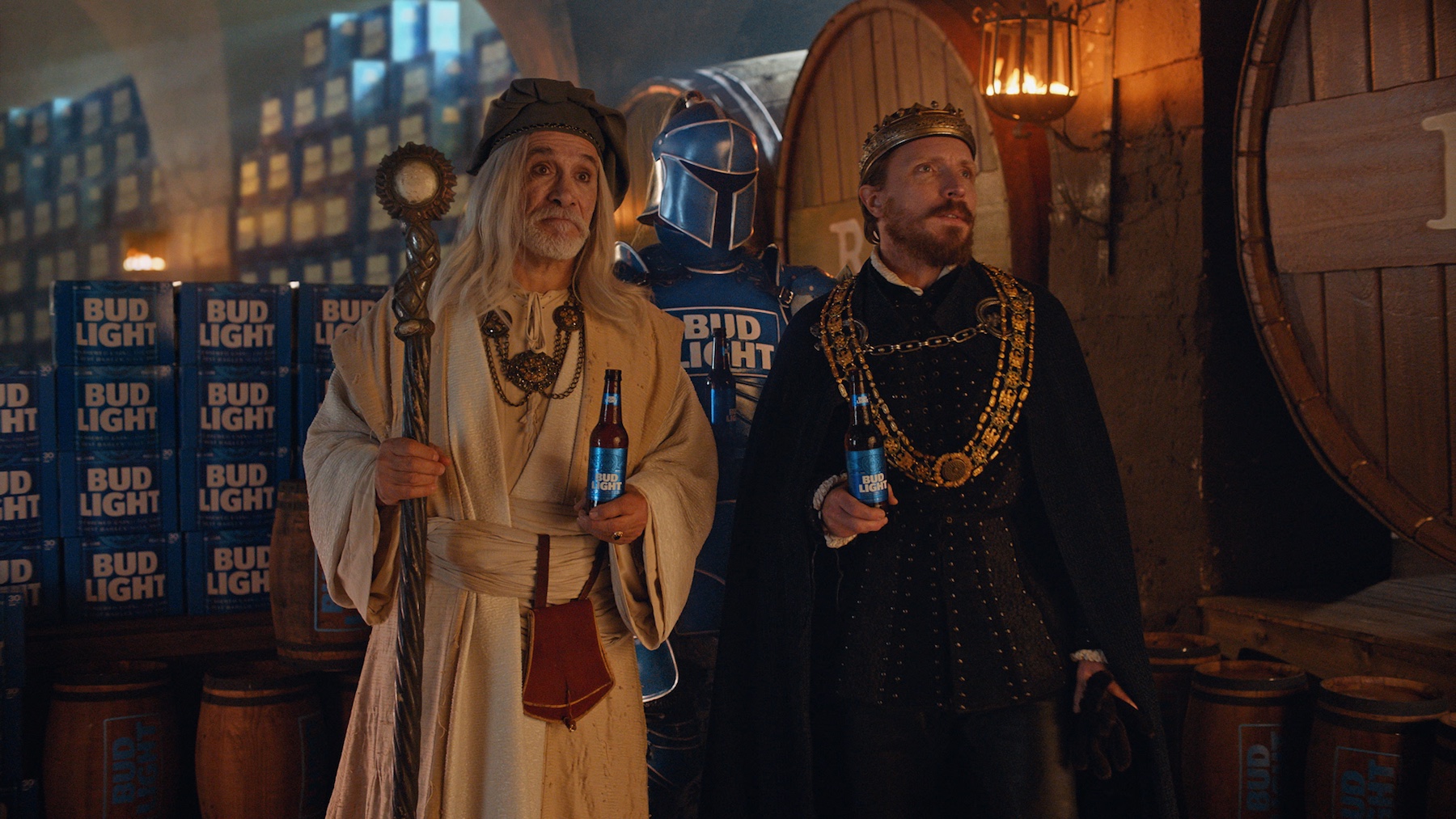