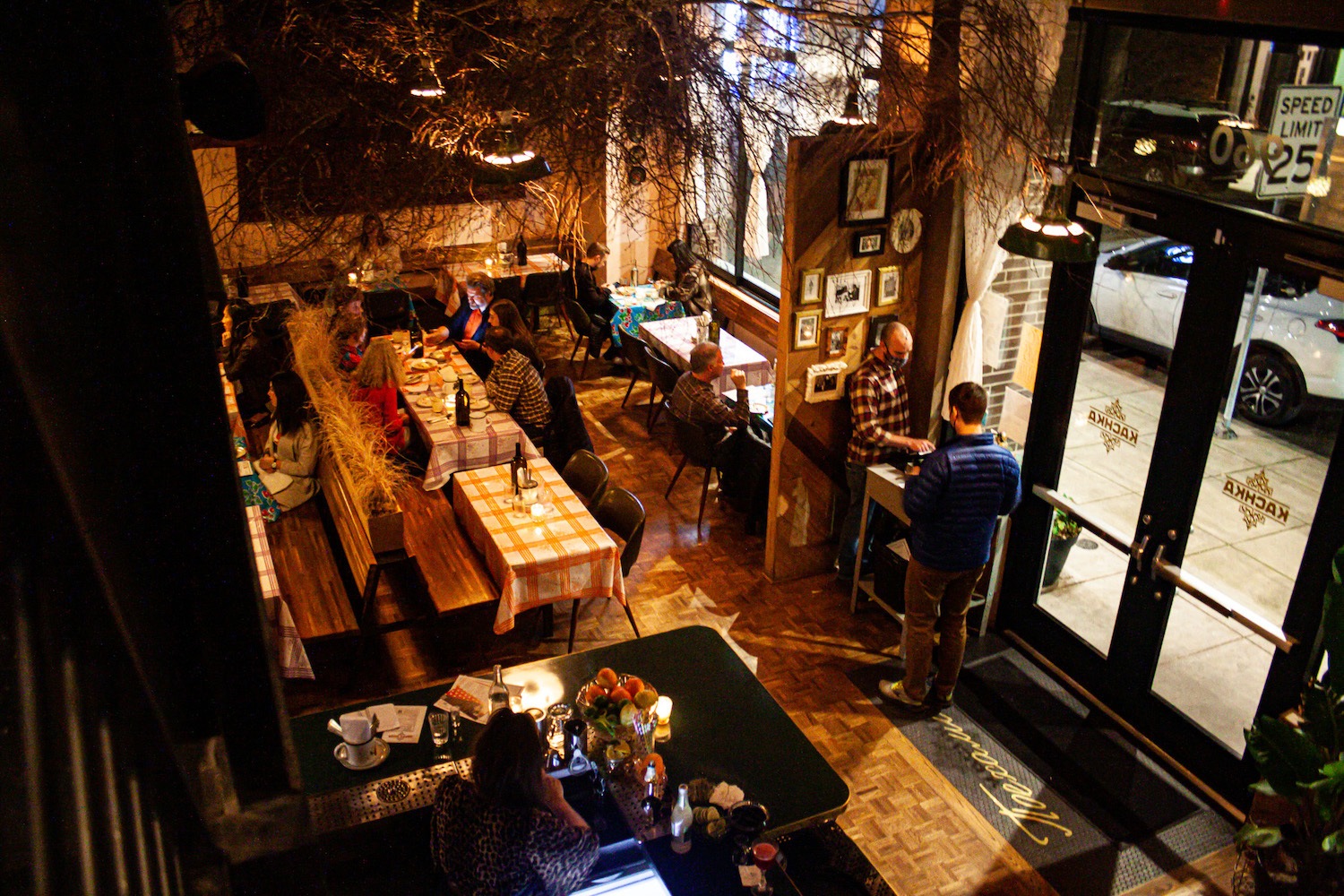 Pictured above: Kachka’s dining room during dinner service on a Friday in January.

Kachka is an established neighborhood favorite—and a fundamentally new restaurant, restructured, the owners hope, to respond to structural flaws laid bare by the pandemic. In addition to the menu, the maitre d’ presents guests with a piece of paper that wasn’t part of the routine before: a flier that explains important shifts in Kachka’s business model. There’s the part the customers see, an automatic 22 percent surcharge instead of tips to guarantee higher wages for historically underpaid kitchen employees.

But what matters most to Kachka’s future are the changes the public doesn’t see: better healthcare coverage and a new commitment to transparency. Owners Bonnie and Israel Morales will open the books to employees twice a year, so they can see exactly how the machinery works. Located in southeast Portland, Oregon, Kachka was opened in 2014 by Bonnie and Israel Morales.

For lead prep cook Alek Hermon, who has worked in Kachka’s kitchen for nearly three years, the change is monumental, the end of the traditional wage gap between front and back of house.

“It means a lot to have the experience and the hours put in finally reflected in my earnings,” Hermon said. “It makes me feel like I have a career as opposed to a job.”

The commitment to transparency stems from the combined experience of Bonnie, Kachka’s chef, and Israel, who has spent most of his career in the front of the house. They’ve both worked in restaurants since the late ‘90s, and have a successful and well-regarded restaurant, in pre-pandemic terms, appearing four times in a row on Eater’s annual list of the best restaurants in America.

But before opening Kachka, Bonnie worked at New Seasons, a Portland-based natural foods store that offered profit-sharing and revealed to its employees how company money was spent. It was a revelatory experience to see how such a large business was run, especially for someone who hoped to open her own restaurant.

“It means a lot to have the experience and the hours put in finally reflected in my earnings. It makes me feel like I have a career as opposed to a job.”

“I loved understanding the guts of the business,” Bonnie said. “I remember those meetings being really eye-opening to me as an employee, and I want to be able to share that with other people.”

As part of the new order, the Moraleses will formally sit down with their staff, twice each year, to give a presentation about the restaurant’s finances. Bonnie has always welcomed employees’ questions about the business, but this will provide an official forum for looking at concrete numbers.

Such transparency provides helpful insight for those who may want to start their own businesses one day, said Bonnie. It’s also an essential first step for making the two other changes, which are more structural.

The couple is covering more of employees’ healthcare costs and has lowered the threshold to qualify. As of 2022, Kachka covers full health insurance premiums, rather than half. They lowered the eligibility threshold to 17.5 hours per week from 27, and cut the waiting period after being hired from 90 days to 30.

“I never knew why we never made that much money in kitchens. I couldn’t buy a car—I barely could pay rent.”

Bonnie said that she has seen back-of-house staff members go without health insurance because they couldn’t afford even half the cost of the premiums.

“With the cost of living, they couldn’t afford to pay health insurance,” Bonnie said. “And that just seems crazy to me.”

To make these changes, she had to dismantle the front-of-house tip model, replacing it with a 22 percent surcharge on the customer’s bill, which allows Kachka to bump up their lowest wage to $25 an hour. Under the old model, dishwashers who made $18 per hour will see a wage increase of $7 per hour. A full-time employee working for $25 an hour will make a yearly wage of approximately $50,000.

Bonnie has wanted to do something to address the front- and back-of-house inequity for years. The pandemic, for all of its significant hurdles, offered Bonnie an opportunity to restructure, with transparency as the key. Kachka’s back of house staff prepares dishes during a Friday night dinner service. Many of the dishes feature ingredients like smoked fish, rye bread and eggs.

“I do think for a model like this to be successful, at this point in time where it is so uncommon, I think that it does go hand in hand,” Bonnie said.

Kachka server Caitlin Midkiff has worked in the restaurant industry for 16 years, both in the front and back of house, and has experienced the inequity firsthand.

“I never knew why we never made that much money in kitchens,” Midkiff said. “I couldn’t buy a car—I barely could pay rent. You have to have like four roommates when you’re working in kitchens. And then I made the switch to bartending.” The income added by tips meant a more livable wage.

More than anything, she appreciates Kachka’s new transparency.

“They’re communicating to each and every one of us and sitting down and helping us plan and make sure that this is going to be beneficial for us,” Midkiff said. “I can see myself working for them for a long time.”

The no-tip model has been tried before, most visibly by New York restaurateur Danny Meyer of Union Square Hospitality Group, who eliminated tipping at one restaurant after another, starting in 2015, only to bring it back in 2020, citing the uncertain future of restaurants in a pandemic world.

While getting rid of tips is generally good news for back-of-house employees, it can constitute a pay decrease for front-of-house workers. Bartenders and servers at high-end restaurants can make much more from tips than from an hourly wage increase. Meyer reported losing 30 to 40 percent of long-time front-of-house staffers in the years after making the change. And an accompanying service charge means sticker shock for customers, even if their total bill is similar to what it was when they tipped.

“I think the tipping question is the question of our generation, for our businesses.”

The pandemic has opened the conversation again, though, as mass defections—resignations in the food service industry have risen from 4.8 percent to 6.9 percent in the last year—led owners to reconsider their business model. “I think the tipping question is the question of our generation, for our businesses,” said David Nayfeld, executive chef and co-owner of San Francisco’s 4-year-old Che Fico, as well as a member of the Independent Restaurant Coalition’s Board of Directors. “I have serious doubts that it’s just going to remain the same. I think everybody is going to try and address it in some way or another. I’m just curious to see which ways end up becoming the norm.”

Nayfeld said there’s no one-size-fits-all solution for restaurants. Smaller businesses, like his, have a thin margin for error. “We need so many things to go right for one month to be a positive generating month in an independent restaurant,” Nayfeld said. “Whereas we need one thing to go wrong for the entire month to go awry.”

After 18 months of discussion with his staff, Nayfeld opted to keep the tip line, but include a 10 percent surcharge on the bill and raise menu prices. This allowed him to raise the hourly wage, still cover restaurant costs, and then split tips among the hourly staff based on position and tenure.

Sharing tips—splitting them among front and back of house—is a common way to address inequity, but to Bonnie it didn’t seem like enough.

“Personally, with the added service charge, I feel more pressure to give really great service.”

She wanted to get rid of what she calls “the dance,” when servers feel that they have to behave in a certain way to make good tips, which can make them vulnerable to harassment if they aren’t deemed to be friendly enough. Ending that dynamic required a complete abolition of the tip model.

“If I have to make tipping available in any way,” Bonnie said. “That would mean we have failed.”

Kachka’s front of house staff faced a wage reduction of approximately 25 percent. To combat this, Bonnie has restructured the front of house schedule to more closely mirror the back of house: the shifts are longer, without staggered ins and outs, which means that wages are about 15-20 percent less than before.

“What used to be a five-hour shift is now a seven-hour shift, as an example,” Bonnie said. “If you just compare before and after, it’s like ‘you’re asking me to work more and make less money,’ and that is true. However, compared to a kitchen employee, you’re now working a similar number of hours and making the same amount of money. And that’s appropriate.”

In this first month of the change, a handful of negative online reviews have cropped up, which tend to revolve around the premise that tipping is the only way to ensure good service.

“Personally, with the added service charge, I feel more pressure to give really great service,” said bar manager Jamie Cecchine. “I don’t want to drop that check and for anyone to feel like they are paying for something that they didn’t get.” When it comes to customer reactions, Bonnie has found that communication is key, which is why the couple includes literature on the switch with their menus, as well as a QR code that will take customers to their website, which has more information.

Rachel Drushella, who was born and raised in Portland, has dined at Kachka about 10 times over the years. She first heard of the restaurant through a food blog she follows, and has been a fan ever since. Drushella likes having the ability to tip, but says she is open to learning more about this alternative approach.

“I’m very much a context person,” Drushella said. “So I always appreciate learning the background of why decisions are made.”

“That says to me that this is something that, not only am I happy that we’re doing,” Bonnie said, “but that the world is ready for—at least Portland [is].”

Lena Beck is a freelance environmental science journalist. Currently based in Montana, her work has appeared in Coastal Review Online, Seattle Magazine and The Missoulian. Owning a restaurant is a risk, but it’s also a privilege—one these first-generation Americans take very seriously What has it been like to operate a restaurant during the pandemic?