The Big Four seed companies have been able to lock up genetic resources for their own use. A database of “prior art” could help small seed breeders keep those resources publicly available.

Twenty-five years later, James Myers still remembers the details of the yellow bean battle as if it were freshly fought. The Oregon State University (OSU) vegetable breeder had become interested in working with dried bean varieties like azufrado and mayocoba from Mexico’s Sinaloa region, to make them suited to growing in more northerly climes. “They were of interest for production here in the U.S., particularly among Hispanic populations who had moved up and wanted the foods of back home,” he said.

Pictured above: Bags of patented seeds from Bayer/Monsanto, one of the “Big Four” seed companies

Unbeknownst to Myers, though, at around the same time the owner of a small private seed company called Pod-Ners had hauled home some of these beans. That man selected and grew them out until he hit on an iteration that had a consistent dusky yellow color; then he named them after his wife, Enola, and took out a utility patent, which is meant to protect “new” or “improved” materials, laying claim to every dried bean that was similarly hued. Anyone hawking dried yellow beans—e.g., Mexican farmers who’d been raising them for generations and public U.S. breeders like Myers generating locally adapted versions for regional ag systems—would have to pay Pod-Ners a royalty for this supposed “distinct and new variety of plant,” in utility patent parlance. In Myers’ telling, trucks crossing the border with yellow beans “that did not have an agreement with this fellow, they were turned around.” For his part, Myers shelved his own work on the beans for almost two decades, not wanting to risk getting sued.

There was a lot of concern in the seed community about the role that company’s monopolistic “biopiracy” played in making genetic diversity unavailable for food crops.

Although Pod-Ners eventually lost its case, four massive global seed companies now control over 60 percent of the world’s seed, and there has been growing consternation over their ability to tie up genetic resources—increasingly important as climate change disrupts what grows where—much in the same way Pod-Ners attempted with those yellow beans. But a small coalition of breeders like Myers, lawyers at the Vermont Law School, and open-source advocate Organic Seed Alliance (OSA) thinks it might have hit on a way to fight back. This hinges on a legal framework called prior art, which the group hopes to make better known to breeders; the small seed companies their work supports; and farmers and seed savers reliant on regionally resilient seeds for crop production. The group aims to build a database that will allow prior art to be easily searchable, and usable, by anyone with a stake in keeping seed in the public domain. And it hopes this might work as an effective tool against the increasingly consolidated market power of Bayer-Monsanto, Syngenta, BASF, and DowDuPont.

In the Pod-Ners case, there was a lot of concern in the seed community about the role that company’s monopolistic “biopiracy” played in making genetic diversity unavailable for food crops. This led to a lawsuit, which led, in 2008, to the U.S. Board of Patent Appeals and Interferences overturning the Enola bean patent. What made this possible, in part, was prior art. This is created any time an inventor adds to an existing public body of knowledge by publishing about his invention, thus making it unpatentable by someone else and keeping it open source. In this case, a document showed that genetically identical beans had been registered in Sinaloa in 1978, which established that Pod-Ners neither “invented” nor “improved” them. That bit of critical information had been tricky to track down, though. This is where a database would come in handy.

Seed companies have been able to foster what she calls a “culture of fear. Breeders don’t really know if and when they’re infringing upon a patent right.”

Plant patents have existed in the U.S. since 1930, to cover plants and their progeny. But the landscape changed dramatically in 1980, after the Supreme Court ruled that utility patents could be applied to living organisms—or even one bit of an organism, like an altered gene or a trait. “They can be used in a way that’s broader, covering much greater range,” said Emily Spiegel, a law professor at the Center for Agriculture and Food Systems at Vermont Law School, who co-wrote a plant breeder’s guide to using prior art.

After the SCOTUS ruling, seed companies “stampeded the U.S. Patent and Trademark Office (PTO) with over 1,800 patent submissions for genetic material of seeds and plants,” according to a Center for Food Safety report. This in turn spurred “a trend of seed and chemical mergers and acquisitions…[leading to] consolidation of the seed industry; rising seed prices; a decline in seed-saving; reduced innovation; a narrowing of seed choices for farmers; and restrictions on independent scientific research.”

Basically, seed companies were now free to snatch up accessions from seed banks; genetically fiddle with them to make them Roundup ready, or frost-resistant, or colored purple; then file for a utility patent whether they planned to use the “improved” seed or not. A utility patent takes that seed out of commission for 20 years, unless a breeder or seed company that wants to commercialize them coughs up for royalties.

Some “improvements,” though, are genetic traits that may also occur in nature, like heat tolerance in broccoli. Patenting these should be considered unethical, according to Kiki Hubbard, OSA’s director of advocacy, since this makes traits essential for food security unavailable for the greater public good. Because utility patents cover features that are so broad, seed companies have been able to foster what she calls a “culture of fear. Breeders don’t really know if and when they’re infringing upon a patent right.” As a result, like Myers and the Mexican beans, they may give up years’ worth of work on a plant varietal rather than risk legal action.

There’s no “silver bullet solution” to the concentrated ownership of seed. But a database for prior art just might help protect and expand genetic diversity for small seed companies.

Prior art, though, can sometimes offer a way forward. For example, about a decade ago,an Israeli seed company filed for a U.S. patent on “high pigment” tomatoes. After an initial confidential period when the patent office first begins to review an application, the information became public and anyone with a stake could challenge it. “You can provide examples of prior art and the patent examiner has to consider them,” said Myers.

In this case, the patent examiner discovered two documents that established prior art for “high pigment” tomatoes. One was a research paper published out of Myers’ lab in 2003. The other was a conference paper Myers delivered in 2004 to the Tomato Breeders Roundtable. Both established that he’d already “invented” such tomatoes by combining wild and cultivated tomato genes. The utility patent application was denied. And Myers just this year released his own indigo-colored Midnight Roma tomato after applying for a less restrictive patent, called plant variety protection. That patent protects just this one variety, allows other breeders to use it to create new varieties without Myers’ permission, and allows growers to save seed from it for their personal use.

To expand their coalition, Hubbard has started to contact some of the 15,000 plant breeders, seed growers, native seed keepers, and other stakeholders in their network, alerting them that in coming months she plans to “convene conversations to identify strategies and approaches that would protect prior art,” she said. She and Spiegel have been looking for patent attorneys to work with them pro bono, to figure out the shortcomings of this approach. And most essentially, they’ve been discussing setting up that online database where “anyone developing new plant varieties could enter their information and share what they’re creating,” said Spiegel. “It would be easily searchable by utility patent examiners, to determine when something in the database counts as prior art for a patent application.”

Spiegel and Hubbard agree there’s no “silver bullet solution” to the concentrated ownership of seed. But a database for prior art just might help protect and expand genetic diversity for small seed companies especially, which are experiencing a resurgence—popping up in response to concerns about the Big Four’s power. “They rely on a diverse genetic resource base to create locally adapted varieties as climate change affects their growing regions. That’s absolutely the group we think will see the most benefit from this,” said Spiegel. 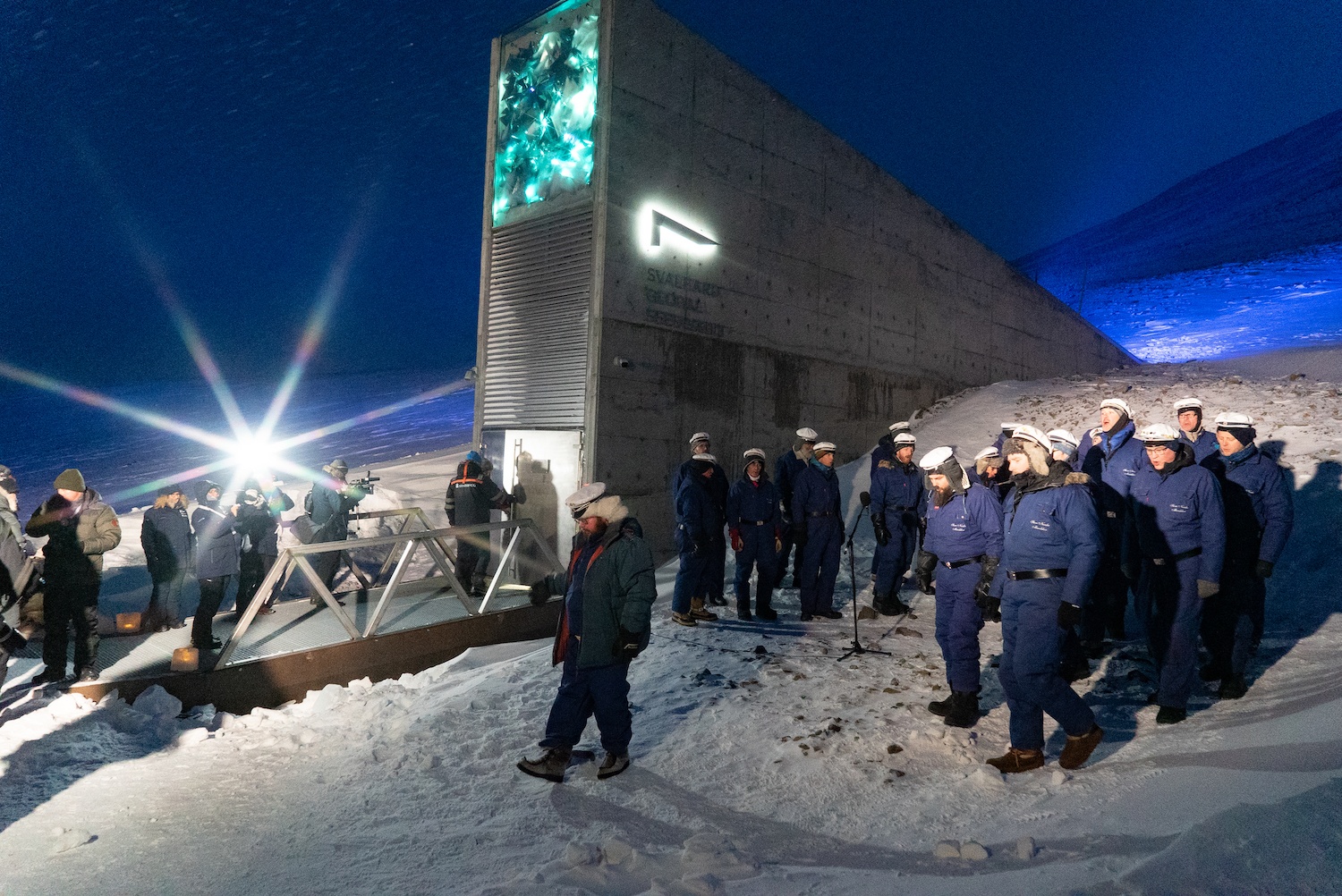