Chet Strange For The Washington Post via Getty Images

Chet Strange For The Washington Post via Getty Images

Brazilian meatpacker JBS SA and its U.S. affiliates agreed this week to pay $52.5 million to settle litigation alleging that the company and other packing giants colluded to drive up the price of beef. Plaintiffs alleged that, from 2015 on, JBS worked with other meatpackers to methodically suppress slaughter volumes—an activity that created backlogs at slaughter plants, made ranchers desperate to sell cattle even at dramatically lower prices, and brought in “sky-high margins” for the companies, according to court documents. JBS did not admit wrongdoing as part of the settlement.

The deal, which still requires approval by a federal court in Minneapolis, is the first in an ongoing series of related antitrust lawsuits against the so-called “Big Four” meatpackers, which include JBS, Cargill, Tyson Foods, and National Beef.

But the settlement has also divided a broad swath of cattle producers and industry advocates. While some see the news as a promising sign that additional, related lawsuits may bear fruit, others feel that a patchwork of legal cases will do little to cure the ills of a deeply consolidated marketplace. These critics remain focused on obtaining more comprehensive and forceful reforms, renewing calls for the Department of Justice (DOJ) to release the findings of its longer-term investigation into anticompetitive activity.

“It’s not a deterrent. A penalty should be a deterrent for future actions.”

News of the settlement comes just a month after the Biden administration announced a $1 billion investment to bolster competition in the livestock industry. And on Thursday, DOJ and the Department of Agriculture (USDA) launched a new online portal that will allow farmers and ranchers to report their own experiences of anticompetitive behavior.

Despite this kitchen sink of federal-level efforts, however, some cattle producers and their representatives fear that the relatively small settlement will do little to slow corrupt activity in an industry that brings in an estimated $63 billion annually. Packers won’t actually feel squeezed, they say—instead, they’ll just figure such deals into the cost of doing business.

“They can profit from it, they can pay the fine, and they know they can do it again,” Joe Maxwell, president of Farm Action, said of this week’s deal, announced on Tuesday. “It’s not a deterrent. A penalty should be a deterrent for future actions.”

Lawyers for the plaintiffs noted that the proposed payout was more than double what the company had agreed to pay in 2020 in a settlement with pork wholesalers, which amounted to $24.5 million. JBS also agreed last year—in two additional pork price-fixing suits—to pay out nearly $13 million to retailers and restaurants, as well as another $20 million in consumer claims. Meanwhile, the company has seen its profits continue to soar, reporting an estimated $1.8 billion in Q3 for 2021 and 146 percent year-over-year growth.

“They represented their plaintiffs but they didn’t represent all of us consumers and farmers and ranchers, so JBS takes a walk.”

Meatpackers’ growing record of eight-figure settlements is seen by some industry groups as a mere rebate for their illegal anticompetitive activity and, worse, allows companies to avoid the admission of wrongdoing. Maxwell said that payouts over price-fixing allegations come nowhere close to reflecting the true cost of damages for industry collusion.

“I can understand the attorneys’ zeal to settle for that kind of money but their case didn’t involve everyone that paid a price for [the market manipulation],” Maxwell said. “They represented their plaintiffs but they didn’t represent all of us consumers and farmers and ranchers, so JBS takes a walk.”

For their part, lawyers described this latest settlement as a win—in part because it will require that JBS provide “extensive cooperation” in the plaintiffs’ pursuit of further antitrust claims against other non-settling meat packers. JBS did not respond to a request for comment.

Cattle producers, led by the Ranchers-Cattlemen Action Legal Fund United Stockgrowers of America (R-CALF USA), which advocates for the success and rights of independent producers, brought a similar case in 2019 against meatpackers that include the Big Four, alleging that they artificially lowered the slaughter supply, resulting in depressed prices for farmers and ranchers as meat-packers raked in record profits. With that case currently in discovery, CEO Bill Bullard said the fact that beef wholesalers reached a settlement at all with JBS is slight cause for optimism. “It suggests that the case is meritorious,” he said. “And because of the similarity with our case, you could apply that there too.”

There was more encouraging news for producers this week. Senator Chuck Grassley, the Republican from Iowa and member of the Senate Agriculture Committee, used news of the settlement to push for passage of the bipartisan Cattle Price Discovery and Transparency Act, which aims to improve fairness and transparency in the beef market. Grassley, one of the bill’s authors, said in a statement that “although the settlement is a spit in the ocean compared to JBS’ record profit throughout the pandemic, it validates what cattle producers have been telling me when they try to get a fair price in the marketplace. It’s time to put an end to these price fixing schemes once and for all.”

“It is clear from this settlement that cattle producers still don’t have all the information they have demanded and is deserved.”

The National Cattlemen’s Beef Association (NCBA) was the first national organization to request an investigation into beef markets in 2019. It said in a statement that the settlement was “deeply disturbing” because it precedes the release of potentially critical information from DOJ’s investigation, which it believes is essential to determining the scope of damages done. But more than a year and a half since the department first subpoenaed JBS, Cargill, Tyson Foods, and National Beef, producers say they have received no updates.

“It is clear from this settlement that cattle producers still don’t have all the information they have demanded and is deserved,” said Colin Woodall, CEO of NCBA. “The DOJ has an obligation to finish their investigation. Cattle producers do not have years to wait for the government to determine whether there has been wrongdoing, we demand answers now.”

Producers aren’t the only ones who don’t want to wait. In December, attorneys general from 16 states signed a letter addressed to Agriculture Secretary Tom Vilsack, requesting that USDA grant funding through the American Rescue Plan to strengthen their own antitrust investigations and enforcement in the sector.

“State attorneys general have the potential to have significant impact on agriculture market concentration, but lack of resources is a perennial limitation on what states can do,” the group said in its letter.

There is some hope that the new online portal launched by the DOJ and USDA this week could be another tool in the White House’s fight for a more fair industry. The portal, which allows farmers and ranchers to anonymously document any tactics that have a whiff of anticompetitive practices, could potentially lead to the departments opening formal investigations. Producers are likely to say they’ll use all the help they can get. ‘Is this legal?’: Why an obscure meat data company has been sued nearly 100 times for facilitating anti-competitive behavior The JBS ransomware hack was only the latest in a surge of cyberattacks on the U.S. food system

A schism in the beef sector: JBS has exited a major beef lobbying group

JBS paid hackers $11 million in ransom after May cyberattack 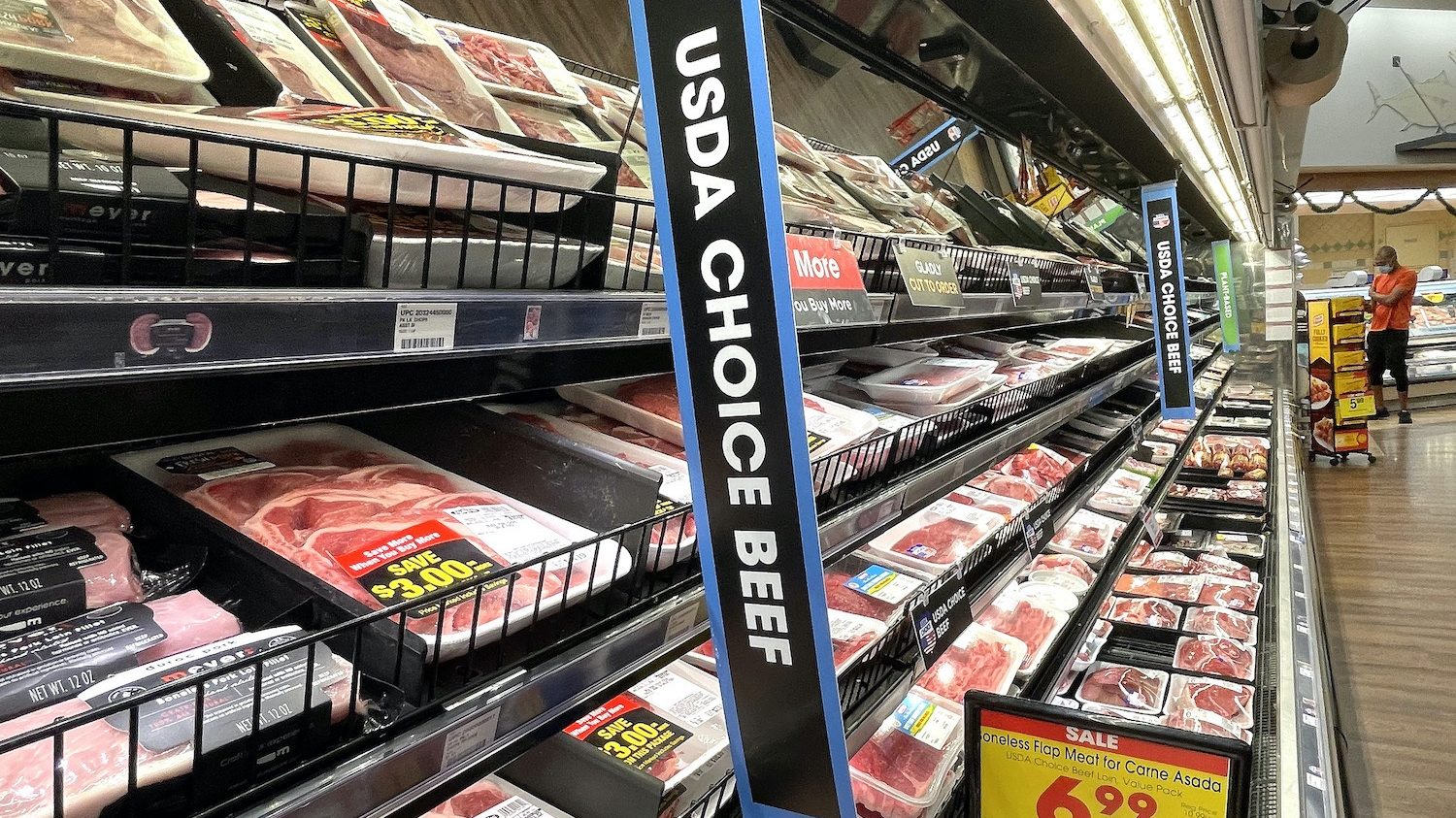