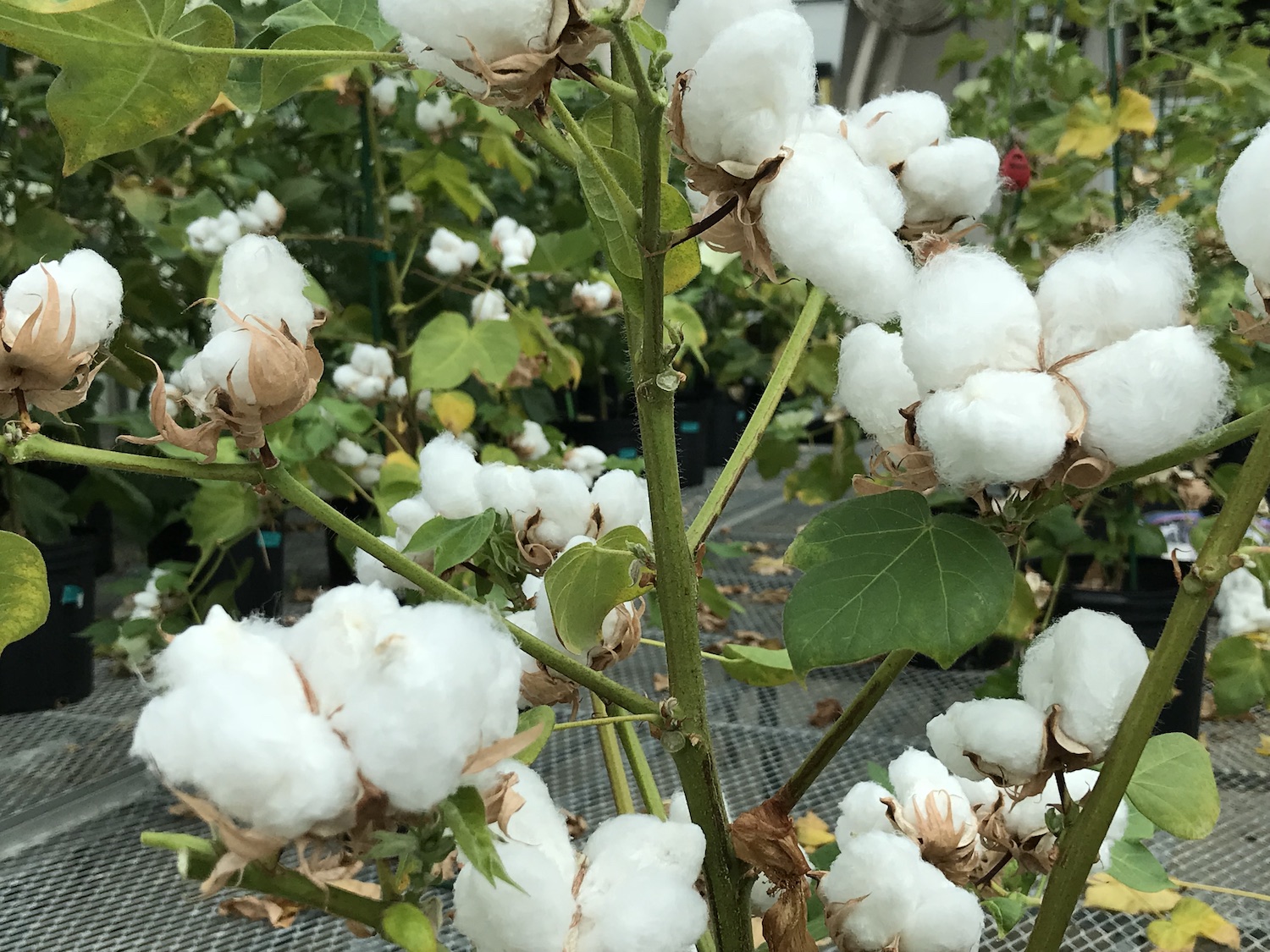 Most cotton plants contain a toxin that makes them inedible for humans and most animals. A tweak in its biology could turn the crop into a worthy protein source.

The Food and Drug Administration (FDA) this month greenlit a genetically engineered form of cotton for use in human food. That’s right, cotton. The stuff of t-shirts and mom jeans and bed sheets and window drapes. Researchers believe that a modified species of the plant can create a new, cheap protein source for both people and animals.

American farmers produce 9.6 billion pounds of cotton every year—worth $7 billion in value—and contribute to a third of the world’s exports of the crop, according to the Department of Agriculture (USDA). To this day, the lion’s share of value is rooted in its fibers—the fluffy, white material that grows in big, round bulbs after flowering. What’s game-changing about the new, GM version of the crop—developed by Keerti Rathore, a professor of plant biotechnology at Texas A&M University—is that it won’t affect the cotton fibers we’ve come to wear and love. Instead, its potential lies in the way that it alters cottonseeds, a byproduct of the plant.

Gossypol cottonseeds have high levels of protein, which could make them a valuable part in the food system.

Unlike the seeds we’re used to eating—sesame, poppy, sunflower—cottonseeds contain a chemical called gossypol, a toxin which can cause symptoms in humans including severe respiratory distress, impaired immune and reproductive functions, and even death. (In the 20th century, scientists conducted research on gossypol as a cheap main ingredient for non-hormonal male birth control. That research was later abandoned due to concerns about toxicity and a lack of cultural support.) Gossypol is also toxic to most animals, except for ruminants like cattle, whose multi-chambered stomachs allow them to break it down—some cattle feed currently contains cottonseed.

But gossypol notwithstanding, cottonseeds also contain unlocked potential. In particular, they have high levels of protein, which could make them a valuable part of the food system. For more than two decades, that’s what Rathore has been trying to do. “If it was possible to utilize the protein locked up in the cottonseed directly for human nutrition, we could meet the basic protein requirements of over 500 million people [per year],” Rathore estimates. “That’s the amount of cottonseed that’s annually produced in the world. And all we are doing right now is just feeding cows.”

Since 1996, Rathore has worked to “silence” the gene in cotton plants responsible for producing gossypol in seeds. In 2006, he encountered a breakthrough by using a biological process called RNA interference that disrupts an organism’s normal biological functions. Rathore found that targeted interference could reduce gossypol levels in cottonseeds, while allowing other parts of the cotton plant, such as its stem, flower, and roots, to retain normal levels of the chemical.

Rathore envisions that cottonseeds may one day be used in a wide range of snacks, such as baked goods, granola bars, or by themselves, roasted like peanuts.

That last quality is important to retain because what’s toxic to eaters also happens to serve as a natural bodyguard against pests. One species of cotton that lacks gossypol—named Hopi cotton after the Native American tribe that has long cultivated it—has proven to be more vulnerable to insects when planted in certain regions.

“You can grow Hopi cotton in places like Arizona [and] New Mexico, the reason being that these are very dry states and the insect pressure is much lower compared to, say, Texas or Mississippi,” Rathore says.

Rathore’s 2006 findings were published in Proceedings of the National Academy of Sciences of the United States of America. Soon after, Cotton Inc., the nonprofit arm of the cotton industry’s checkoff program, began funding part of Rathore’s research.

In the years since, Rathore and a select group of farmers have conducted greenhouse and field studies of the genetically engineered seed to ensure consistency in cotton yield, seed yield, and gossypol content. Field tests took place in Texas, Mississippi, and North Carolina, three cotton-growing states with somewhat different climates. In 2015 trials, gossypol levels of Rathore’s GM cotton clocked in at 260 parts-per-million on average, well below FDA’s 450 parts-per-million cap. For context, gossypol levels for the control group reached 8,300 parts-per-million. A test field of the genetically modified, low-gossypol cotton

In September 2017, Rathmore submitted the cotton to both USDA and FDA for approval. Last year, USDA deregulated the genetically engineered cotton, giving farmers free rein to grow the crop. FDA’s move this month gives producers permission to use it as an ingredient in human food, as well as animal feed.

There’s still a bit of time before low-gossypol cotton becomes a part of the food system. Rathore tells me that his team is in talks with seed companies, which will be able to sell the genetically engineered species to farmers if they license Rathore’s technology. Beyond the bureaucratic aspects, low-gossypol cottonseeds also face the challenge of overcoming the cultural stigma surrounding genetically modified foods.

Cottonseed products aren’t categorically groundbreaking. Cottonseed oil, which is chemically processed to be gossypol free, is a commonly available cooking oil. But Rathore envisions that cottonseeds may one day be used in a wide range of snacks, such as baked goods, granola bars, or by themselves, roasted like peanuts. Last year, Rathore told the San Antonio Express that cottonseeds have a “mild, nutty” taste.

Cottonseed is already readily available as a byproduct of cotton farming, and thus, has a lower marginal environmental cost.

Then there’s the possibility of using cottonseed meal—which is what remains of cottonseeds after oil is extracted from them—into feed for aquaculture operations. As The New Food Economy has reported, the seafood farming industry has long sought plant-based replacements for key ingredients in fishmeal— namely forage fish and fish oil, which are limited in supply. In recent years, feed producers have experimented with the likes of soy, canola, and even wood. However, researchers have also criticized the production of these substitutes for the land-based resources required to harvest them.

Unlike those ingredients, cottonseed is already readily available as a byproduct of cotton farming, and thus has a lower marginal environmental cost, says Kater Hake, vice-president of agricultural and environmental research at Cotton Inc.

“The use of [cotton] products doesn’t require any additional fertilizer or water or land,” Hake says. “Right now the protein can only be used for ruminant animals, primarily cattle. Being able to take that protein to other sources is just a wonderful thing [for] the total food supply.”

Some research regarding the extent to which cottonseed can be used as an aquaculture feed substitute has been published for species like black sea bass, shrimp and mitten crabs. In these studies, scientists found various, positive replacement thresholds that have no adverse effect on growth. Similar research for human appetites remains to be seen.