‘Tis the season for canned food drives and volunteer stints at the local food pantry. This Thanksgiving, after the turkey pardons, the First Family served meals to residents of the Armed Forces Retirement Home. And they weren’t alone: Food service and charitable food donations are rituals for lots of American families at this time of year. But it’s also crunch time for food-assistance programs, which are at their most strained during the holiday season. In Rhode Island, recent ongoing delays in the delivery of SNAP benefits propelled more clients to local food banks. And in Arkansas—where the U.S. Department of Agriculture (USDA) says both overall and severe hunger are the highest in the nation—pantries struggle to keep up with holiday demand.

But in recent years, the traditional food bank model has drawn criticism from nutrition and public health advocates. The takes are familiar: They distribute junk food. The food is too high in sodium. They rely on non-perishable items. There aren’t enough fruits and vegetables. They’re not open late enough, or in the right places. They’re culturally tone-deaf. They keep people diabetic and fat. They’re a private sector solution to a public sector problem. Their existence subsidizes Big Food….

The timing is right for the emergence of new food bank economy.

And while those criticisms hold obvious appeal, especially for those who don’t have to rely on food banks to make ends meet, there are still plenty of people to feed with a limited supply of food (healthy or no), issues of chronic understaffing, and few reliable ways to get fresh food to the people that need it before it goes bad.

So the timing is right for the emergence of new food bank economy. As the big organizations like Feeding America strive toward incremental change for their member banks (right now, 68 percent of Feeding America’s food is classified as “foods to encourage”), alternative emergency food aid programs are gaining traction on a local level. Like the problems they’re hoping to address, their approaches are diverse—from a vegetarians-only outfit in Canada to an Oregon bank that focuses on cultural relevance. Here are six aiming to upend the traditional food-assistance reputation:

Volunteers find joy in each other's company as they bag bananas to be distributed to families in need. Share your inspiring volunteer stories with #FeedingAmerica. Copyright @natgeo, Courtesy of @feedingamerica Photo by @anniegriffithsphotography

Chiles in Cottage Grove. In Cottage Grove, Oregon, one food bank is seasoning its menu with a side of cultural relevance. Community Sharing stopped including turkeys in some of its holiday boxes after its executive director learned that many of the bank’s Latino clients didn’t know what to do with the bird, Public News Service reports. It was a revelation: Community Sharing shifted its focus, providing ingredients more familiar to the communities it serves.

Elsewhere in the state, the Oregon Food Bank takes a different approach to inclusivity. Instead of dishing out tortillas and chiles, it prioritizes adaptable ingredients. “You can do so much more with a can of tomatoes than you can once it’s already a pasta sauce,” sourcing manager Katie Pearmine told Public News Service.

The campus pop-up. Administrators at the University of Washington in Seattle responded to reports of student hunger with a pilot food bank project last Spring. Their hunch was confirmed: over a hundred students showed up to their pop-up food bank on campus. Of the group, a third needed support to feed dependents and almost a quarter described difficulty accessing food each week, the Seattle Times reports. And most of those students were younger than 21 years old. As a result of the pilot, the university is continuing the pop-up on a monthly basis.

Campus hunger is more widespread than most of us know. A study released in July by the University of California Global Food Initiative found 40 percent of University of California students reporting a lack of consistent access to nutritious food. The university system responded by announcing a $3.3 million initiative to combat malnutrition on campus. That includes a program that allows students to donate extra meal plan dollars to others in need, as well as system-wide cooking and money management classes. And, since 2009, UCLA has been stocking an unmarked storage closet with staples where students who need them can stop by without fear of stigmatization .

Connecting the dots. One food bank in North Carolina addresses food waste and food aid at the same time: its volunteers glean unpicked produce from nearby farms and prepare it in the facility’s kitchen. Then, meals are frozen for clients—solving problems at both ends of the spectrum.

The Inter-Faith Food Shuttle also takes gleaned vegetables on the road through its Mobile Market program. By going directly to the communities it serves, the food bank is able to ease the burden of transportation on its clients and deliver fresh food faster. 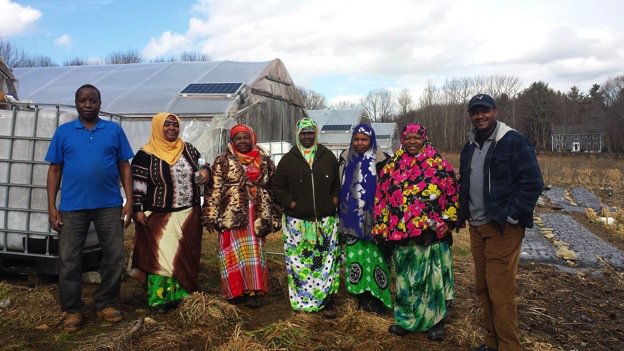 “We want to be farmers until we die” heartwarming story video: https://t.co/ZXGbRH7i9V #newhampshire @LandForGood #foodjustice pic.twitter.com/PMZQKk2n5L

Teach a man to fish… Or just give a man his own land. In New Hampshire, the Organization of Refugee and Immigrant Success has purchased almost 60 acres for its clients to use, the Concord Monitor reports.

Members work the land, growing whatever they choose, and take home 100 percent of the proceeds on whatever they sell. Farmer Sylvain Bukasa, who moved to the United States from the Democratic Republic of the Congo in 2006, told the Monitor he made $1,000 in his first season to supplement his income. “I wanted to be a part of that country, where we help people who can’t afford food, or those who are disabled, by making sure everyone has something to eat. I think it’s something we should encourage, people becoming not just self-sufficient but someone who can help others,” Bukasa told the paper.

Growing your own food and selling what’s leftover: there’s an idiom there somewhere.

Omnivore’s dilemma. Toronto’s all-vegetarian food bank celebrated meal number 50,000 this month, CBC News reports. The vegan-friendly pop-up pantry, which exclusively serves vegetarians, vegans, and those transitioning to a plant-based diet, has pledged to ensure that at least half the food it serves is fresh.

It seems counterintuitive: help people get fresh food, but only people who happen to share your opinions on animal rights? “We want to not have people put in a position where they have to choose between feeding themselves or harming another being,” executive director Matt Noble told CBC.

TBT to the day in August when we #gleaned over 1,000 pounds of tomatoes! #foodrecovery #ncfarms #foodshuttlefeeds

Cash, not cans. In a small town in Ontario, Canada, Operation Sharing—a charity run by local churches—abandoned its food bank and created Food for Friends instead. Users of the program get non-transferable cards preloaded with funds that they can use to buy non-taxable groceries (food products like bread, milk, eggs and produce). The program is supported by $0.25 donations given by the public at the checkout counters of participating stores.

The focus here is discretion, choice, and dignity for card users, who get to shop the way everyone else in their community shops: at a grocery store. Though the non-taxable items stipulation does still exclude users from purchasing candy and confectionary, alcohol, soft drinks, and prepared meals in much the same way food stamps do, the program’s director, Steve Giuliano, told Rabble he’d eventually like to extend the benefits–after the community adjusts. “I knew our community’s tolerance for change was going to take time,” he said. “If they saw their neighbour going through with five bags of chips, they might not give a quarter. People needed time to catch up to the concept. They still do.”