iStock / vgajic
From free pizza and birthday cake to cafeteria sandwiches, workplace food is a significant factor in the American diet—and it deserves another look.

Just how unhealthy is it to get lunch at work? You know—eating at the company cafeteria (which 30 percent of Americans have at work), cobbling together a meal from the vending machine (which 50 percent do), or noshing after you get a Slack notification that there’s leftover pizza on the 10th floor (no comment)? How much of our diet is consumed at places of employment, how wholesome are those calories, and how do those choices affect our health overall?

A new study funded by the Centers for Disease Control and Prevention (CDC) and published in the Journal of the Academy of Nutrition and Dietetics purports to have some answers.

Researchers wanted to know what we’re eating at work, how much money we’re spending on it, and the toll it takes on our health. Using data from a United States Department of Agriculture (USDA) survey of 5,222 working adults who logged all the food they ate during a seven-day period, they found that our places of employment are feeding us often: Nearly a quarter of respondents ate food obtained directly through their worksite—whether given for free as a perk or at parties, or purchased through a corporate snack bar or cafe—at least once, and many on multiple occasions, during the course of the week. No surprise: What they ate was usually “high in empty calories, sodium, and refined grains, and low in whole grains and fruit,” the researchers found.

According to the Healthy Eating Index, a metric created by USDA to measure nutritional quality on a scale of one to 100, workplace fare scored an average of 48. That’s the same score as a Wendy’s menu. Food consumed at work added extra calories to their diets—about 1,292 calories a week—with more than two-thirds of that coming from food given away for free.

That we don’t eat well at work is not altogether surprising. Research has shown when we eat food prepared away from our homes, it’s typically higher in empty calories and lower in the better stuff like fruits, vegetables, and whole grains. But the study suggests that we should take a closer look at the large role professional life plays in shaping our diet. And work, where we spend one-third of our lives, could present an opportunity to create new behaviors.

The food people buy at work is slightly different from the stuff they scarf down for free.

“Even though it’s not the main source of calories, [workplace food] is affecting a lot of people, with so many working adults in the United States,” says epidemiologist Stephen Onufrak, the study’s lead author. “There’s a lot of reach there.”

The availability of food at work varies widely by demographic. This study found education level was the strongest predictor, with college graduates twice as likely to have a workplace diet than those without a high school diploma. Data on what people in specific jobs are eating wasn’t available, though Onufrak’s other research has shown that college-educated adults are more likely to work for a large employer, and larger employers are more likely to offer perks like cafeterias and vending machines.

The CDC study had another revealing finding: The food people buy at work is slightly different from the stuff they scarf down for free.

The respondents bought an average of 1,080 food calories at work the week they were surveyed. Soda, sandwiches, chips, donuts, and pastries accounted for more than one-third of those calories, along with burgers, burritos, and candy. More frequently, respondents got their calories from free food—the detritus of office parties and conference room meetings, perhaps. Nearly 17 percent of respondents were moochers, getting something for free at least once during the survey, and on average, scavenging for a 1,206-calorie weekly bonanza. Want more? Nine percent of respondents paid for their office grub (Suckers.) Five percent of them scored free food every day.

We’re not talking 1,206 high-quality calories. The top free food at work was pizza—who’d have thunk?—accounting for around 178 of those calories per week. Many of the usual lunch offerings were also up for grabs. So were cakes and pies, which accounted for 32 free food calories.

So what’s going on? Onufrak didn’t want to speculate, though it could be that the employers feel pressure to serve food at office functions that is cheap, easy, and crowd-pleasing—foods, in other words, that tend to be less healthy. It’s not altogether surprising that free food tend to be cheap food, and that cheap food tends to be junk.

The larger idea is this: Free food is still food. Even if you didn’t pay for it, you still ate it. And when that food isn’t healthy, and contributes to obesity, it’s hard to call it a job perk. What happens at work doesn’t stay at work, and this study is a reminder that you’re taking home more than pay. 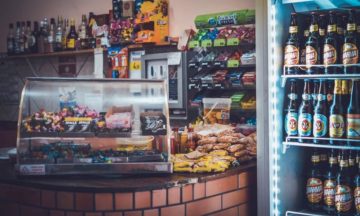